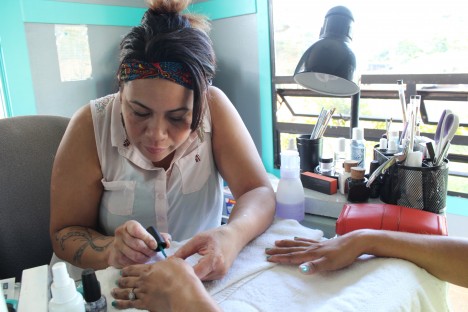 Growing up, Leilani Kadowaki was bewildered by beauty salons. In her hometown of Maunaloa, there was a salon called Sheer Delight, and when people went in and emerged with new hairstyles, it puzzled her.

“[I said,] ‘What are you guys doing in there, getting your hair all permed up in those curly things? The lady looks scary,’” Kadowaki remembers with a laugh.

More than 20 years later, hairstyling is one of her passions, and she and her family are bringing the beauty business back to her hometown. Michelle and Raymond Hiro, Kadowaki’s aunt and uncle, helped her open a salon on 100 Maunaloa Highway, in the same spot as the salon of her childhood, which was converted into a Molokai Ranch security office and later went unused for more than a decade, according to Raymond. The family’s business, Maunaloa Salon, officially opened on Nov. 22, offering hair and nail services for men, women and keiki.

For Kadowaki and the Hiros, it was the perfect crossroads of talent and opportunity. According to Michelle, she and her husband had been looking for more business opportunities and felt a salon would meet a big need on Molokai. They also knew Kadowaki, a licensed hairstylist and nail technician, wanted to return to Molokai after living on Hawaii Island for nearly 10 years, so they decided to fund the salon.

“She always missed the island,” Raymond said. “The majority of our family lives on Molokai. [We wanted] our niece Leilani to be able to come back home and do what is her passion, and at the same time raising her children.”

Michelle, who owns Molokai Cellular in downtown Kaunakakai, has experience with business, while Raymond is the maintenance manager at Molokai Ranch and was able to work on the water pipes in the salon.

“It kinda worked out,” said Michelle. “It’s not like we never did this kind of stuff before.” 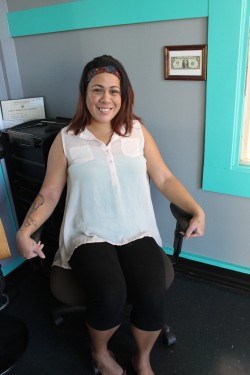 Leilani Kadowaki poses with the first dollar she made at the salon. Photo by Colleen Uechi.

Since Molokai Ranch closed down in 2008 and left 120 residents without jobs on the west end, Maunaloa has been “a ghost town,” said Michelle. Raymond explained that he’s noticed a trend of businesses rising and falling in the town and hopes that the salon, along with neighboring businesses and the Ranch, can continue to grow and bring life to Maunaloa.

“We try to stay really close together and do what we can do to provide for our community,” said Raymond. “We need everything to cooperate out there. … When businesses flourish, the community flourishes.”

Kadowaki said tourists and locals from all over the island have come to the salon. She and the Hiros already have plans to set up a location in Kaunakakai, estimating it will be in place this year. In addition to making things easier for Michelle, who commutes to Kaunakakai daily from Maunaloa, they hope it will create more jobs. Meanwhile, Kadowaki, a mother of four, is keeping busy as the only employee of the Maunaloa Salon. The business she once found strange is now what she uses to bring people joy.

“[I like] just making everybody feel beautiful, making them happy,” she said while painting a customer’s nails in turquoise and gold.