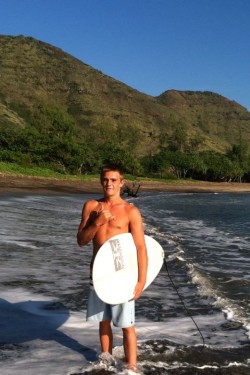 The family of Koshari Kahikili Waits, who was found dead on Molokai’s east end last month, is offering a $25,000 reward in hopes of finding answers.

“I am begging as his mother… if anyone has any information that can lead to understanding how he was killed, please come forward,” said Nancy Campbell-Kowardy, via email. “Koshari’s extended family on the mainland is offering this reward hoping that it could encourage anyone afraid to come forward with information to do so.”

Waits, born in Halawa Valley, had been working at Pu`u Hoku Ranch. A few months ago, Campbell-Kowardy said he sent her a video of a hydroelectric project he was working on.

“I felt so proud of him and so full of hope for his future,” Campbell-Kowardy wrote on a Facebook page in his honor.

The day before he was killed, Waits received a promotion.

“His boss told me how excited he was and what a great day he had on Monday,” wrote Waits’ mother.

That was his last day alive.

Early in the morning of May 20, a moped driver saw Waits’ motionless body lying in a dirt roadway along Kamehameha Highway around mile marker 15. Police reported a suspicious head injury.

Campbell-Kowardy, a Hawaii Island resident, said she did not know her son had died until the following day.
“I… did not learn of Koshari’s death until Wednesday afternoon, May 21, from a TV news reporter who called my in-laws,” she said, via email. “When I called the Molokai Police, I was told that as a policy they cannot give information out over the phone so it was hours before I was able to get in touch with Koshari’s sister-in-law, who confirmed his death.”

For Campbell-Kowardy, it was just the beginning of a long wait in search of answers.

On May 23, a Molokai man was arrested in connection with the murder investigation, but was released the following day.

Police have said very little about the investigation since then.

KITV reported last week that Maui investigators released that Waits suffered a single gunshot to the back of his head.

However, a spokesperson for the Maui Police Department said simply that the investigation is ongoing and did not “have any further information at this time.”

Campbell-Kowardy said the lead investigator has been on vacation “so it has been hard to get anyone on the phone to speak to me.” 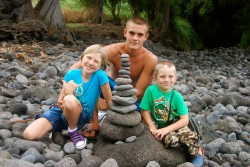 She said she talked to a detective on Maui who was able to answer some of her questions, but she was recently informed that the evidence is “sitting on Maui awaiting the request from the Honolulu Police Department’s forensic lab.”

“It is very difficult to have to wait indefinitely with no answers as to when this evidence will be analyzed,” she said.

On June 5 at Ierosalema Hou church in Halawa, family and friends celebrated the life of the son, brother, grandson, uncle and cousin they had lost. They offered flowers to the ocean that he loved so much, with Waits’ younger brother paddling Koshari’s surfboard into the bay.

In the meantime, his family is left with only questions.

“I am praying that everyone involved in the investigation has run this like they were investigating the death of their own child,” said Campbell-Kowardy.