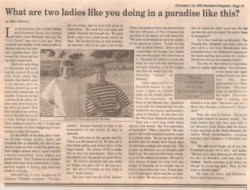 Left, Ineke Haase of the Netherlands visited Molokai in 1992 and The Molokai Dispatch printed an article about the journey of her and her friend in the Nov. 12 issue. Right, Ineke and her husband Chris visited Molokai with their sons last week for the first time since their meeting 20 years ago. Photo courtesy the Haase family.

Molokai has played a large role in what the Haase family believes is fate. In the fall of 1992, Ineke Bylsma and her friend Elizabeth Peters — two young travelers from Holland — were visiting Molokai as one stop of an around-the-globe tour. They ended up camping at Papohaku Beach for a few months, hitching rides to Kaunakakai to buy food.

An article about the two was even printed in the Nov. 12, 1992 issue of The Molokai Dispatch, titled “What Are Two Ladies Like You Doing in a Paradise Like This?”

They decided on Molokai as their Hawaiian stop because “we were told that Molokai was the most Hawaiian of all the islands and that we would find Hawaiian ‘culture’ on Molokai,” according to the Dispatch article.

One day as they walking along the road with their thumbs out for a ride, a young American man named Chris Haase stopped to pick them up. He was visiting Molokai while working in Kaneohe on Oahu, finishing his PhD.

“I was staying at the Sheraton Resort and was driving down and saw two beautiful girls,” chuckled Chris. “Thinking that it was a mirage, I decided to stop.”

He drove them to the Coffees of Hawaii plantation, where they went on a tour. Later that evening, he invited them to the Sheraton for a hot meal — a welcome commodity for the campers, added Ineke.

For Chris, it was love at first sight. Unbeknownst to Ineke, Chris called his mother that night and told her he had met the girl he was going to marry.

A few days after their meeting, Chris and Ineke flew together to Chris’ hometown of Chicago, and 14 days after they had met, Chris proposed. They were married in May 1993.

Last week, Ineke and Chris Haase visited Molokai for the first time since their meeting on the island 20 years ago, bringing with them their two sons, ages 14 and 16.

“It’s so wonderful to share what happened with the boys,” added Ineke.

They spent a few days on Molokai, visiting the sites of their love story, even playfully reenacting the moment Chris picked up Ineke on the side of the road.

“The trip has been just great,” said their older son, Mark. “I imagined it differently when they told us the stories.”

Despite the fact that the Sheraton Resort is no longer open, Chris and Ineke said they are happy to see Molokai is still the way they remember it so fondly.

“We were thrilled to see the beauty of Molokai is unchanged and that the friendliness has endured 20 years since we’ve been here,” said Chris. “For us it’s a very special place because of our meeting but also because we regard Molokai as the most beautiful island. Its warmth, culture and people are what make it a very special place.”

The family lived in Chicago for many years, but now resides back in Ineke’s home country of the Netherlands. They visited Molokai for a few days last week before continuing their vacation on Maui.

“We won’t wait another 20 years to come back,” they laughed.