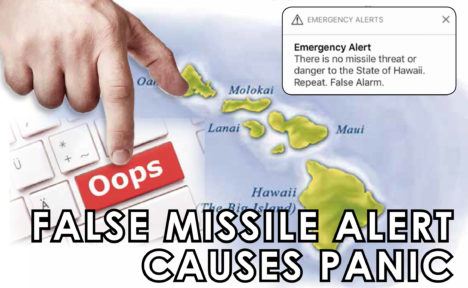 An accidental alert warning of a ballistic missile attack sent to Hawaii cell phones last Saturday morning left residents in shock and panic. The message, sent in error by the Hawaii Emergency Management Agency at 8:05 a.m., read, “BALLISTIC MISSILE THREAT INBOUND TO HAWAII. SEEK IMMEDIATE SHELTER. THIS IS NOT A DRILL.”

Officials said the message was sent out as a result of human error — an employee “pushing the wrong button.”

“There is a screen that says ‘Are you sure you want to do this?’ That’s already in place,” Miyagi said. “We had one person, human error and that thing was pushed anyway.”

An initial Federal Communications Commission investigation of the incident on Sunday found that it appeared the state “did not have reasonable safeguards or process controls in place to prevent the transmission of a false alert.” A full investigation is underway.

Though county, military and other officials took to social media within 15 minutes to alert residents to the error, it took the Emergency Management Agency 38 minutes to send out a second alert to cell phones letting people know about the mistake. Gov. David Ige said a procedure wasn’t in place to send out a correction using the same system, and it took time to send out the second alert. That time lag has drawn a lot of criticism.

“There is no excuse for yesterday’s false alarm and the failure to quickly correct it,” said Sen. Brian Schatz. “It terrified residents and visitors, and it undermined our ability to notify the public in a real emergency…. This incident exposed serious weaknesses in our state’s emergency alert system that must be fixed.”

Across the state, the alert left residents and visitors in hysteria and confusion, not knowing if they were awaiting their final moments. Many called loved ones, while others ran for the nearest buildings. On Molokai, reactions varied from frantic to acceptance.

“…We [were] in Molokai Burger, looked at my wife oh well [and] we sat down [and] had breakfast with family… I was like, I’m fine with it, I’m with family [and] I sent out a text to my off island and mainland family so it is [what] it is,” recalled one resident on The Molokai Dispatch Facebook page.

“My husband saw [the alert] first, showed it to me, and we flew out of bed,” wrote another resident. “Ran outside in a terror to make sure the neighbors got the message. Got the family in the truck and headed for the closest concrete building, which for us is the police station…. It was a truly awful experience.”

The alert was so concerning in part because of mounting tensions between the leaders of North Korea and the U.S., and North Korea’s recent nuclear threats. Miyagi said at a press conference Saturday that North Korea doesn’t pose a huge threat. However, due to Hawaii’s proximity to North Korea, officials have ramped up emergency preparations in case of a nuclear missile launch. Last month, sirens in Hawaii were tested for nuclear attack warning signals for the first time since the Cold War.

State officials have vowed a false alarm won’t happen again. But it pays to know what to do in case of a real threat.

Most analysts believe Oahu would be the main target of a nuclear attack, and estimate that 90 percent of the island would survive based on an explosion diameter of about eight miles, according to the state Department of Defense (DOD). Molokai and other neighbor islands would likely avoid a direct hit but officials advise all areas of the state to be prepared.

Once the emergency alert system is activated, there would be less than 15 minutes before impact. Officials advise residents to get inside and stay inside, wherever you are, as there are no fallout shelters in Hawaii, according to the DOD. Close all windows and stay as close to the interior of the building as possible. If you’re outside or driving, seek shelter in the closest building, preferably a concrete structure. If there is none nearby, lie flat on the ground, and do not look at the flash of the blast.

After the impact, officials advise people to be prepared to stay inside for 14 days or until the all clear is given. That means have a stash of food, water and other emergency supplies for at least two weeks ready in your home. Officials also say communication technologies like cell phone networks would be down so having an AM/FM radio for information and updates is a good idea. Nuclear radiation cannot be detected without specialized instruments, so wait for tests to be done and the all clear to be given before leaving shelter. In most cases, radiation can last days to weeks after the blast.

In the meantime, many lawmakers are calling for increased negotiations with North Korea.

“Our leaders’ failure to take seriously the nuclear threat posed by North Korea and engage in face-to-face discussions to alleviate that threat, has produced the crisis we face today,” said Congresswoman Tulsi Gabbard. “I hope that leaders in Washington and the President truly understand the terror that Hawaii’s families just went through, and heed this wakeup call about the catastrophic consequences of nuclear war.”