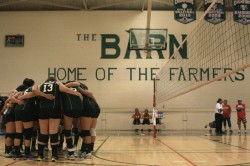 Molokai High School girls volleyball gear up before a game at their volleyball classic Friday. The tournament was the first of its kind on Molokai and at the end of the first night, the farmers had a 4-4 record. Photo by Jessica Ahles

The Molokai High School (MHS) Farmers are lacing up as fall sports return for another season. Record-breaking roster numbers, new competition, and more tournaments hosted on Molokai create high hopes and expectations for the green and white.

Girls Volleyball is in full swing as they’ve just competed in their volleyball classic last weekend. According to Hoku Haliniak, MHS athletic director, This is the first tournament of its kind on Molokai.

Four teams from Oahu including Henry J. Kaiser High School, Waialua High School, and two teams from President Theodore Roosevelt High School gathered at The Barn Friday. Molokai finished the first day with a 4-4 record, which continued Saturday morning, according to Hoku Haliniak, MHS athletic director. As of Sunday night, final scores could not be obtained.

Last year, the girls didn’t make it to the state level but finished third in the Maui Interscholastic League (MIL) championships, said head coach Mahea Rawlins, “which is pretty good considering we didn’t have any seniors.”

This year, 21 girls came out to trials and 14 with girls made the team, representing all grade levels. Rawlins said she is working to include a Junior Varsity team this year because of the increased number of interested players.

“Right now we’re doing okay but I have a feeling we’re going to come out with a better record than last year,” said Rawlins. “We have a lot of returning players and we have a lot of talented freshmen.”

“I know they’re going to do to their best,” said Domingo. “It’s never about winning, it’s about bettering their skills. For this age they can’t be afraid to make mistakes, so it’s a great learning experience for them.”

Eight-man football is aiming to start the season strong coming from a 4-2 record last year.

Over 40 players are on this season’s roster—17 of which are freshmen—breaking the record of highest number of players in MHS football history, according to head coach Mike Kahale.

Expectations are also steeper on and off the field. Kahale has set the team goal of a minimum 3.0 GPA as well as implementing a new mandatory football study hall on Wednesdays.

“My goal as a coach is to build a culture of high expectations and accountability among the football athletes and coaches,” said Kahale. “As coaching staff, we want to teach sound fundamentals and a love for the game.”

Kahale said he plans to take this year’s Maui Interscholastic League (MIL) title, but not at the expense of sacrificing the character and integrity of the team.

“Ultimately, we are trying to build the program, as it is still in new and unfamiliar territory for community,” he said. “My goal as a coach is to enlist the support of the community and the high school by changing the culture to a more positive and supportive attitude towards the game of football on Molokai.”

Ka`u High School is planning travel arrangements to come from Hawaii Island on Oct. 5, and Molokai may be returning the favor, which would add an additional home and away game to the six scheduled games, according to Kahale.

All eight-man teams will also be heading to Maui to participate in a one-day pass league jamboree.

In 2012, MHS football became a MIL-sanctioned sport for the first time in 50 years. Two years prior, MHS had operated as a club with private schools St. Anthony and Seabury High. Since then, Hana High School has also joined the MIL and it will be welcoming its newest addition, Linai High School, next fall.

“Overall, [there is] a new attitude of excitement and expectation heading into this year,” said Kahale.