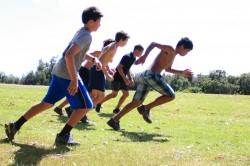 The boys cross country team had their first practice at Ironwood Hills Golf Club last Thursday, where this year’s MIL championship will take place on Oct. 19 at 10 a.m. Photo by Jessica Ahles

Steep hills and stiff competition is the theme for Molokai High School’s (MHS) cross country and air riflery teams, yet as another fall season arrives, they are keeping their eyes are on the prize.

The boys cross country team was in the middle of the pack last year. According to 15-year head coach Gandharva “Mahina Hou” Ross, the farmers placed third in the Maui Interscholastic League (MIL) championships and 44th out of 160 schools in the state championships.

This fall, the eight-man team is coming back with six returning runners and welcoming two freshmen.

“The returning group is all pretty much at the same level [as each other],” said Ross. “We’re trying to run as a team instead of as individuals.”

Molokai is hosting the Maui Interscholastic League (MIL) Championships for the first time this year. Schools will meet at the Ironwood Hills Golf Club, Saturday, Oct. 19, at 10 a.m. and race to see who will move on to the state championships.

The boys team met last Thursday to walk through the three-mile course and practice running one of the hardest hills in the state—one they will have to run twice come race time due to the nature of the course, said Ross.

“By the end of the season, you guys should be running between five and six of these hill repeats,” he said to his team at Thursday’s practice.

Ross said he expects them to at least make fifth place but they are shooting high to take one of the top two spots in order to move on to states.

“It all comes down to that race,” he said. “The boys are going to have to work a lot…but we have a pretty tight pack this season and hopefully that will get us to the top.”

Last year was a season of discoveries for girls cross country. It was all about learning the techniques, the drills, and their physical abilities, said head coach Eugene Santiago.

“I’m still learning about my side of coaching,” said Santiago. “But as I run with them, I give them pointers and tell them if you can talk and run at the same time, you’re running a good pace. It helps build their lung capacity.”

Twenty-three girls have joined the squad this season, a staggering increase from last season’s 14-runner team. Some have joined to train and condition, while others are dedicated to run competitively.

“I don’t have a problem with that if they want to get healthy,” said Santiago. “As a coach I need to be very aware of what the students are seeking and their other commitments, but also try to emphasize that they are here to run for competition and need to be dedicated, committed, and disciplined.”

This season, six junior varsity (JV) runners are traveling off-island on Oct. 12 to participate in the JV MIL championships on Maui. Santiago said while they won’t participate in all of the competitions this season, it will give them some good experience running competitively.

The varsity girls team will also compete in the MIL championships on Molokai this year on Oct. 19 and will race prior to the boys team.

Besides competing and training hard, Santiago said building relationships and enjoying one another’s company is an important part of the team dynamic.

“It’s all about having fun,” he said. “Athletics is more than playing the sports, it’s about learning different life lessons that they’ll use long after they graduate and become contributing member to their communities.”

Boys and girls air riflery are cocked, aimed and ready for the fall season.

“We have a really young team this year, but they really want to go already and see what [air riflery] is all about,” said girls head coach, Eddie Gorospe.

Boys head coach Henry Corpuz said the first two weeks of practice has been all about introducing the players to the sport, learning safety precautions and how to shoot.

Out of the nine girls on the team this fall, two returning shooters, sophomores Kea`a Davis and Sabrina Curtis, are this year’s hot shots, said Gorospe.

For the boys, there are five returning shooters on of the 13-man team, said Corpuz.

“Two boys that look really good are Michael Corpuz and Pono Chow,” said Gorospe. “They can get into the top five in the MIL.”

Last year, the boys came in third out of six teams in the MIL Championships, while the girls placed second — just eight points shy from taking first place — competing against some schools packing 40 players, according to Gorospe.

Because the scoring system takes the top four shooters from each school, high-number teams offer an advantage over teams such as MHS, which is considered to be one of the smallest teams in the league besides Hana, said Gorospe.

The MIL is currently looking at reducing high school teams to two, four-man teams for 2014, according to Gorospe. Schools will have to determine the eight varsity shooters who will participate in competition and JV teams will help encourage students to try out.

Gorospe said he believes the boys team will take the MIL championship this year and the girls will be close to doing the same.

“We take no prisoners,” he said. “It’s in our Molokai blood.”

This season, air riflery will compete twice before the championship in October. Their first meet is scheduled on Sept. 14 at Maui High and Sept. 28 at St. Anthony’s.