Molokai High School (MHS) students were happy to learn how to dance like Tahitians when students from Ra`apoto High School in Tahiti performed traditional song and dance in an assembly held at the Barn on Thursday. A group of 38 students performed three different types of dances –the otea, with rapid hip-shaking motions, the aparima, a more lyrical dance which tells a story using hand movements, and the haka, or warrior dance. During their performance, Molokai students were invited to come to the front and share in Tahitian dance, song and culture.

Ra`apoto students have visited Molokai four times as part of a cultural exchange program that began in 2006. The program started when Hawaiian Immersion Language teacher Manuwai Peters and a group of his students visited French Polynesia to participate in the Maohi Festival six years ago. As part of the trip, they visited Ra`apoto High School and initiated a sister-school relationship after he realized “we had so much in common as Pacific island educational institutions,” said Peters via email. 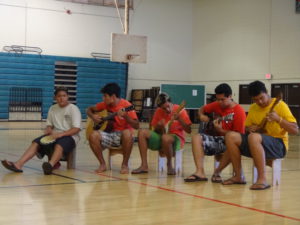 “Molokai is the piko of the Hawaiian Islands,” said Chantal Canadas, an English teacher at Ra`apoto High who communicated with Peters via Skype to bring the students to Molokai. “It is so friendly and is the best way to have relationships among young students.”

“The Ra`apoto students are very fun people and even though it’s hard to understand our [English] language, we still are able to make a bond and understand each other,” said Mataio Sibayan, an eighth grade student at Molokai Middle School. 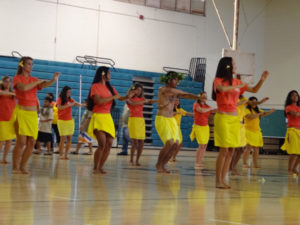 Students from Ra`apoto High School in Tahiti performed traditional dances at an assembly held at The Barn last Thursday. Photo by Eileen Chao.

“The French language background of their students introduces our students to this important world language,” said Peters. “The communication challenges this presents is a healthy learning activity that stretched the thinking and perspective for both groups of students and for our host families.”

Students from Ra`apoto High School in Tahiti performed traditional dances at an assembly held at The Barn last Thursday. Photo by Eileen Chao.The Ra`apato students will perform at the Polynesian Cultural Center on Oahu later this week. Both Peters and Canadas said they hope MHS students will be able to visit Tahititi next time.