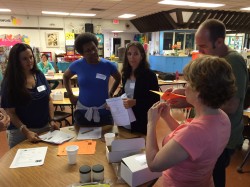 Molokai High junior Sarah Jenkins hopes that her senior project will take an island-wide trend of energy awareness and conservation to the next level. She said she thinks teaching Molokai’s youth about energy literacy is a good place to start, and on March 1, teachers from around the island participated in an energy education workshop with that very goal.

In a series of workshops offered statewide in collaboration between Hawaii Energy, a ratepayer-funded energy conservation and efficiency program, and National Energy Education Development (NEED), nearly 20 Molokai teachers from elementary through high school levels learned how to better educate their students on energy topics. In addition to performing a number of hands on activities for themselves, they each went home with a kit valued at $300 to $400 to use in their classrooms.

“This workshop sparks the interest of teachers to teach kids [about energy] at a young age — something I never had,” Sarah said.

In Hawaii alone, for example, 33 barrels of oil are used for each man, woman and child living in the state. Seventy-four percent of energy generated comes from imported oil. Hawaii Energy claims to be helping to change those numbers and push the state toward its goal of 70 percent clean energy by 2030.

“If [students] can go home and show their parents how energy efficiency works, hopefully [we can reduce fossil fuel consumption],” said Moats-Barnes. “Because Molokai is so small, everybody’s actions account for a larger percentage.”

Teachers gathered around experiments from the kits using batteries, wires, thermometers, light bulbs and even apples to show the science of energy.

“It’s going to give me different ways to demonstrate [energy],” said MHS teacher Weldon Wichman. He said he already teaches a unit on energy but said the kits will expand the opportunities to present the material.

“The earlier students are exposed to [energy education], they’ll live the lifestyle [of energy conservation],” he said, supporting Jenkins’ hope that one day, the entire island will be more conscious of their energy footprint.

For the high school’s immediate future, Smith said energy conservation could have a tangible and much-needed effect.

“Spend less money on electricity, and that would secure more money for teachers,” he said, adding that by reorganizing and prioritizing schools’ limited funding could mean more resources could be directed where they’re most needed — on teaching students.

When Sarah and her mother, Canoe Complex Area STEM Resource Teacher Heidi Jenkins, learned the workshop was coming to Molokai, they helped “spark the interest of teachers to come,” said Sarah.

The workshop is part of the junior’s senior project action plan. She’s getting a head start on the project by launching a two-week energy challenge on campus next month, as well as conducting an energy audit on the school. In addition, Sarah plans to visit both elementary and high school classrooms to help teach energy literacy.

Next year, she’ll be working with Hawaii Energy and NEED to make adjustments to how the school uses energy.

“Once I’ve identified the major users of electricity [where most of MHS’s electric bill is spent], then we’ll work to improve the school by implementing those changes,” said Sarah. She said she’s also working on a green management plan for the proposed new science classroom building on campus.

That will be made possible in part by a $2,500 grant from Hawaii Energy and NEED that Sarah wrote with Smith.

Sarah’s interest in energy was sparked  by working with two energy-saving initiatives that took place across Molokai as a partnership between Blue Planet Foundation and Sust`ainable Molokai. Over the past few years, the CFL light bulb exchange and the Hui Up program that offered trades for old refrigerators with Energy Star models have already raised residents’ awareness of electricity conservation, Sarah said.

The CFL and fridge exchanges already taught residents about energy efficiency, or using technology to eliminate waste and still get the desired services without using as much electricity. But Sarah’s project hopes to take efficiency to the next level: conservation.

“Conservation is actually changing behaviors and habits to use less energy,” she explained. For example, using an electric car would decrease the use of gas, but adjusting one’s lifestyle and riding a bicycle instead of driving a car would conserve the most resources.

Saturday’s event was one step in that process.

“After the teachers obtain this new knowledge, my goal is to utilize teachers and students to help improve energy conservation at Molokai High School and throughout the island,” said Sarah.