Roast Pork House, a favorite dining spot for visitors and locals alike, has added a lot of new perks including free coffee and WIFI since it came under new management. Elsa Salazar Aquino, who worked at the restaurant since it opened over a year ago, purchased the establishment and made some dramatic changes, including a more personable business name and a clean and cohesive new look.

Elsa’s Kitchen, as it now goes by, celebrated its grand opening Monday, March 4. Those who stopped by noticed a number of new changes, including a vibrant new logo that is featured on the front sign and uniforms as well as an expanded menu.

When Aquino first undertook the task of owning and running the restaurant, she realized it was in need of an update. In order to decide on a new name, she presented a survey to employees, locals and tourists with a few options.

Jennifer Teriong, a part-time waitress for the restaurant, said that it was almost unanimous that Elsa’s Kitchen should be the restaurant’s new identity.

“It just sounded more personal,” said Teriong. “And given all the hard work and great meals Elsa has been cooking, it was appropriate.” 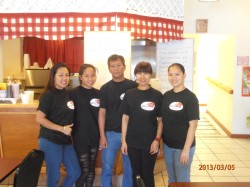 Staff of Elsa’s Kitchen gather in the dining area

Aquino is assuring loyal customers that the menu has not changed. The same dishes offered at Roast Pork House are still featured on the menu at Elsa’s Kitchen, only with the addition of a breakfast menu and burgers.

Teriong said that she likes the new changes, especially the breakfast menu.

“It’s a great idea for those early birds who have to work super early,” she said. “We have American, Hawaiian, and Filipino breakfast now and a variety of dishes to choose from.”

To make her breakfasts even more appealing, Aquino wants to let customers know that free coffee and hot tea is offered from 6:30 to 8:30 a.m.

Aquino also revealed they will start introducing new items such as nachos and pastas. She said they try out new items about once a week.

“People have been asking for Wifi,” Aquino said. “They need to keep in touch with families and check emails.”

. Aquino noticed that not many businesses on the island offer the service and decided to get the jump on the competition.

“We have plenty of competitors, but we do our best to provide excellent services and to make it affordable,” Aquino added.

Elsa’s Kitchen is located downtown Kaunakakai across from Friendly Market Center. The restaurant is open Monday through Saturday 6:30 a.m. to 8:30 p.m. All major credit cards are accepted, but not checks or EBT.