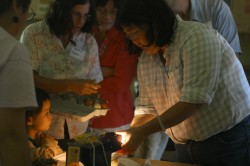 Jeri Kahana demonstrates how to candle an egg at the workshop held last Tuesday. Photo by Jessica Ahles

As more Hawaii residents flock towards raising chickens in their backyards, some may not be aware of the state and federal health regulations for selling their eggs to the public. As part of a statewide tour by the Hawaii Departments of Health and Agriculture and the University of Hawaii, a dozen of Molokai’s backyard egg farmers familiarized themselves with these guidelines during an egg workshop last Tuesday.

“We knew of people [on Maui] who were doing backyard egg producing and were trying to sell…to high-end hotels,” said Lynn Nakamura-Tengan, a food safety educator at the University of Hawaii Manoa, during the workshop. “So we wanted to educate people about what needs to happen if they are selling eggs.”

Nakamura-Tengan and Jeri Kahana, a quality assurance administrator from the state Department of Agriculture (DOA), led a discussion on correct egg washing, storing, inspecting and grading practices for selling and marketing in Hawaii.

“I’m glad that they are having this workshop to get some information, ask questions, and get updated on issues in the industry,” said Beverly Ferguson, one of the emerging local backyard farmers who attended the workshop. One attendee, Cheryl Davis of Davis Homestead Eggs, is an established egg retailer marketing in Molokai grocery stores.

From Coop to Crate
Eggs produced on a free-range farm are often dirtier than those from cages due to dust, mud and feces. According to The National Sustainable Agriculture Information Service, 30 percent of free-range eggs are soiled and must be thoroughly washed and sanitized.

“When you’re handling [eggs], you have manure on your hands and bacteria, which you can’t see,” said Kahana. “If a consumer cracks the egg into a bowl, a piece of shell falls in, and if they eat it undercooked, they may not kill that bacteria. That’s why we recommend you wash your eggs.”

According to Kahana, eggs shells contain pores, which can breath. If the temperature of the water used to wash the eggs is 20 degrees colder than the inside temperature of the egg, reverse osmosis can occur and contaminants can get pulled into the egg.

A good rule of thumb is to always wash with potable water between 100 to 120 degrees Fahrenheit, said Kahana. Any temperature warmer than 120 degrees can crack the shell.

There is also a range of detergents and sanitizers to clean eggs such as soaps, quaternary ammonia, iodine and chlorine, however they must be accurately diluted, fragrance-free and food-grade for consumer safety.

Once cleaned, refrigerate eggs as soon as possible, advised Nakamura-Tengan. If they’re left out at room temperature, not only does it deteriorate the quality of the egg, but also provides an ideal growing environment for bacteria.

“As a seller, you are responsible to make sure that [harmful bacteria] isn’t present in your product,” said Nakamura-Tengan.

According to the U.S. Department of Agriculture (USDA), eggs should be stored at a temperature no warmer than 45 degrees for no more than 30 days. 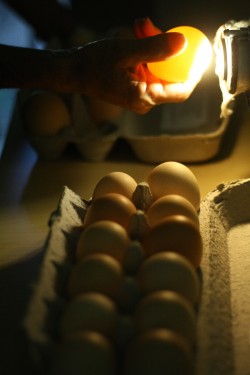 Workshop attendees got a chance to practice candling, shining a bright light through an egg, to find any defects. Photo by Jessica Ahles

Sizing Up Your Eggs
Grading involves sorting eggs based on size, weight and quality. Grades AA, A and B have standards that must be met in order to be suitable for the public and in farmers markets, restaurants and stores.

To be considered Grade AA, which is only one or two days old, the shell must be clean and unbroken, the yolk must be free of defects such as blood spots and foreign material, and the egg white must be clear and firm.

Once the yoke is formed, said Kahana, two layers of egg white forms around it. There is a thicker, milky color layer surrounding the yoke and a clear, thin layer around the outside. If you crack an egg and the white layer appears thick, it is a fresh egg added Kahana.

As an egg gets older, usually within four or five days, that thicker white breaks down and gets clear and watery, which is considered a Grade B egg. In this process, moisture and carbon dioxide evaporates through the pores of the shell, creating an air pocket on the rounded part of the egg, called an air cell.

“The older the egg, the bigger the bubble,” said Kahana, “If you have fresh eggs, the bubble will be small.”

Nakamura-Tengan gave attendees a card that measures air cell size. Quality inspectors use these cards to determine freshness of the eggs.

When you’re grading an egg, said Kahana, you are essentially measuring the thick white height. However, because the egg must be cracked to directly measure the white, examining other characteristics such as the air cell and yoke definition, which can be viewed through a process called candling, is reflective of the egg’s thick white condition.

Egg X-Ray
Candling uses a bright light source that allows viewing through the shell, which helps determine overall egg quality without cracking it.

“When you candle, and you don’t see the yoke very well, chances are you have a very fresh egg,” said Kahana twisting the egg to see its movement.

Workshop attendees got the chance to practice candling using their own eggs to find the yoke and egg quality. Established business owner Cheryl Davis used her farm’s eggs for demonstration.

“You do a wonderful job,” Kahana told Davis. “Everyone should go buy your eggs.”

Kahana advised everyone to use the candling technique in the future.

“You’ll get used to seeing what’s normal and when something’s wrong, it will catch your eye,” she said. “That’s the idea behind candling.”