Eat, Drink and be Maika`i: Hotel Lively but No Kitchen Until 2014

When Hula Shores, Hotel Molokai’s restaurant and bar, burned down last June, there were questions over the business’s future. But thanks to a small menu and some talented kupuna, Hotel Molokai is still serving up drinks, food and entertainment until the new restaurant is rebuilt.

Hotel chef Gene Pike cooks up mahi-mahi, chicken, hamburgers and hotdogs as dinner plates or sandwiches Thursday through Monday from 4 until 9 p.m. Na Kupuna attracts a crowd to the bar each Friday night, and the market that goes along with the event gives vendors a chance to make money and send visitors home with souvenirs.

But the new restaurant won’t be open until fall or winter. Pike said their hopes are to open by the end of the year.

“We’re trying to be as green as possible,” he said, noting the plans for LED lights and solar hot water in addition to the green cleaning products the hotel already uses.

Not only will the building be green in terms of energy, though. Pike said once the restaurant is opened, their aim is to serve as much locally grown food as they can, a practice they started before the fire.

“We’re wanting to do a farm-to-table type of menu,” he said. “We’ve got a large agricultural island, and the restaurant doesn’t need a lot.”

He said they won’t only be relying on large suppliers for their menu items.

“People who are growing in their back yard – herbs, lettuce, tomatos– we’ll take any or all of that,” he said. “We give them credit on the menu too.”

He said these producers could vend at the Friday market during Na Kupuna, the event that led management to reopen the bar so soon after the fire. 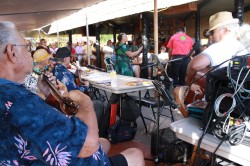 “It’s first come, first serve and one table per vendor,” she said. “And everybody’s drinking, so they’re more likely to spend money.”

Hotel manager Michael Drew said they have offered the Friday market free to vendors and shoppers for years and he encourages vendors to come out each Friday during Na Kupuna, where there is music, hula and a good crowd.

Drew also said the bar is open five days a week. However, it doesn’t stay open too late, something that will change once the new restaurant and bar is open.

“We’re moving to the far corner of the hotel, ocean side, so the noise goes out to the ocean,” he said, adding that there are plans for a wall to go up that will also serve as a sound barrier. He said the bar, where they will serve Pike’s farm-to-table menu, will have an ocean side lounge feel and will be open until as late as 2 a.m.

And although they’re not offering a full menu, there are no plans to shut down the bar until the new one is ready to open.

Pike said there have been a lot of rumors about the future of the hotel, and it’s been tough to clarify and publicize their small menu due to lack of advertising funds.