Earning their Bread and Butter 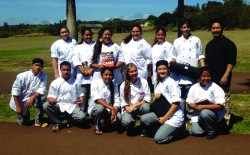 Eating the food they cooked was the icing on the cake for students who spent their fall break in the kitchen.Twelve students interested to explore culinary arts signed up for the free course called Molokai Culinary Arts Boot Camp Oct. 7 through 11 at the Ho`olehua Lanikeha Center.

Funded by the U.S. Department of Labor through the Rural Development Project, the boot camp featured Chef Lyndon Honda of Maui, who shared skills and techniques of the industry.

“When I was setting up the curriculum, I set [the bar] pretty high because I felt like if we could attain that, it’s great and if we can do more, that’s even better.” said Honda. “My goal going into this was if everyone could learn and take away one thing, I would be happy. They did more than that.”

Honda said he first handed out a survey to get a grasp for the students’ skill levels entering the course.

“After the first day, I thought these kids were crazy — crazy good!” said Honda. “Right off the bat, I saw they had the work ethic.”

Each day, the group had to make a green salad with three different dressings, a pasta salad, two soups—a clear soup and a cream-based soup—two entrees, veggies, and a dessert. Several skills the students learned included frying, sautéing, roasting, brazing, and even how to cut sashimi.

“A lot of cooks in the industry don’t even know how to cut fish, let alone how to cut sashimi,” said Honda. “Some of the techniques they learned are advanced even for cooks.”

Boot camp participant Wyott Purdy said despite being fairly new to cooking, the week was fun and he will continue cooking at home.

“The hardest thing was remembering what to grab and what to do,” said Purdy. “My favorite part was eating the food because everything was so good.”

“The program [was] geared towards high school students on Island that showed interest in the foodservice field,” said boot camp Molokai site coordinator and cook Cameron Hiro, via email. “The students normally started off the morning with some lectures and class time, then immediately headed into the kitchen and started cooking!  They actually cooked their own lunch every day.”

On Friday, a luncheon held for the students’ family and friends marked the completion of the course. Although four students could not complete the boot camp due to other extracurricular responsibilities, the eight remaining participants prepared more than 20 dishes served at the luncheon.

The feast showcased what they learned to cook throughout the week included dinosaur kale with toasted yellow and red beets, roasted fennel, radish, and mango dressing; roast pork tenderloin with shitake mushroom soy cream, and braised spinach; and malasada with salted caramel sauce.

Barry Gay, the statewide associate director for the U.S. Department of Labor, and Chris Speere, Maui Culinary Academy program coordinator, presented the students with completion certificates at the end of the lunch.

“This week you learned a lot about cooking…but you also learned some incredible traits that you can take with you into your life,” Speere told the students. “You learned about being dependable, following through, working as teams together on a task, taking direction, being positive, and taking criticism.”

Speere said he has spoken with several students who expressed an interest in pursuing culinary arts.

“If the opportunity arises, we’d love to see you on Maui at our Maui Culinary Academy,” said Speere. “You are exactly the type of students we would embrace and enjoy at our program.”