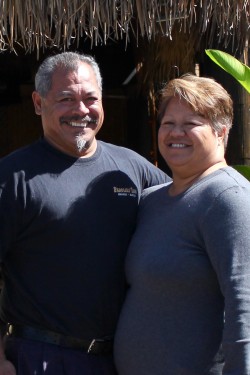 Siblings Kama Hoe and Tammy Smith consider themselves the news kids on the block, entering the Molokai community as general managers of Paddlers Inn, bringing over 30 years of food service experience with them. Photo by Jessica Ahles

If you’ve tasted a difference at Paddlers Inn lately, it’s probably thanks to sibling team, Tammy Smith and Kama Hoe, welcomed into the Paddlers family as of September 2013. Working as general managers, they are dedicated to not only improving the total dining experience, but also creating job security and supporting the community while they’re at it.

Before their parents, Herbert and Julia Hoe, left Oahu 20 years ago to start retired life on Molokai, they had instilled the importance of hard work, family and community into their children.

“I’d like to think we taught them well,” said Herbert. “I had this saying—I’ll leave you with no money, but I’ll leave you to be independent and with a good education.”

For more than 30 years, Smith and Kama have excelled in food service, managing their own catering companies and restaurants, feeding thousands on Oahu and on the mainland. Now, splitting their time between their business on Molokai and Oahu, Smith said they are no different today than when they were growing up in Hakipu`u.

“We were never able to slack even as young kids,” said Tammy Smith, one of five siblings in the Hoe family. “That’s not what we do and that’s not our family’s mentality. We reflect our parents and we cannot let them down.”

Built in 2004, Paddlers Inn was always meant to be a community center for meeting friends and eating great food, said part-owner Jerry Johnson.

“The big factor missing was a chef,” said Johnson. “One who could bring meals with local appeal and also the experience to create dishes of a more exotic nature.”

While the restaurant had gone through several operators, they lacked formal culinary experience, according to Johnson. Last year, Johnson said he approached longtime friend Herbert, for suggestions after he had helped in the kitchen once before at Hotel Molokai the 1990s. Herbert, a retired firefighter and formally trained in the culinary arts, had a couple names in mind.

“When our dad said, ‘You guys, come to Molokai and help take care of this place so you can help save jobs,’” said Smith, explaining Paddlers business had been wavering at this point. “Of course we said yes. He’s our dad and we can’t say no.”

Serving Aloha Daily
When Smith and Kama first arrived, they noticed several areas lacking in the restaurant and bar including service quality and the bar menu.

“They needed a lot of help [in the kitchen],” said Kama. “We started with pupus for the bar, then we slowly went to their menu. We wanted to slim the offerings because the idea is to be consistent.”

The core menu has stayed the same, including selections of grilled mahi mahi, smoke-roasted chicken and burgers and sandwiches. Kama said he’s has fun creating nightly specials with themed Italian, seafood, and Chinese specialty dishes and a side of warm French bread and a cool garden salad with every entree.

“Our feedback has been great,” said Kama. “And we leave here feeling good because people go home with smiles on their faces. People feel good about their experiences here.”

“People are afraid of changes and they can very hard to accept,” said Smith. “But the buzz is getting better, the service is getting better. There’s still tons of work to be done but it’s heading in a good direction.”

Since taking the position, they said part of their mission was to stabilize jobs for over 30 employees currently working there, bringing aloha back to their service.

“My first day walking into this place and introduced as the manager, I said everybody that comes to work here needs to bring their aloha,” said Smith. “People come here looking for that aloha and it’s not just from your mouth, you have to feel it.”

Giving Back to the Community
Since revamping the menu, Kama and Smith have been working with local producers in the community to keep dollars on Molokai. Using greens from Barking Deer Farm, local meat from the Molokai slaughterhouse, and shrimp from Keawa Nui Farms, Kama said part of their goal is to highlight Molokai products and boost the local economy.

“It’s not so much a business sense, it’s a community sense,” said Kama. “If you only look at it from a business point of view, you’ve lost. It’s all about the impact we’re making and the connections were building in the community.”

Though the siblings said they are new to the Molokai community, they have participated in several projects, volunteering at Ka Honua Momona fishpond alongside their father, and are deeply committed to carry on their parents’ positive influence on the island.

“This is our commitment as kids and who we have to represent,” said Kama. “It’s in a mahalo sort of way—we’ve got to take care of a place that takes care of our parents. It’s about giving back to a place that has given our parents a lot.”

Proud of his kids, Herbert said he’s happy to spend time with both Kama and Smith and see them uniting in business.

“They took different paths but both in food service,” said Herbert. “Now, after 35 years, it’s good to see them working together for a common good.”

Both Kama and Smith have dedicated six months as Paddlers’ general managers and have said they will sit down with owners to talk about their next moves. Until then, Kama has said to “stay tuned” for further changes they plan to share with the community, including more Hawaiian dishes, island catering services as well as providing educational training for kitchen staff partnering with the Molokai Economic Opportunity Inc.

“[Paddlers] has got plenty potential,” said Smith. “This place can take care of Molokai and the needs of Molokai. For us, this is not the Tammy and Kama show. This is about Molokai.”