A Dreamer at Heart 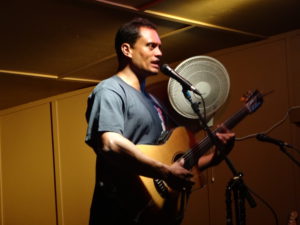 When Ekolu Kalama dreams, he dreams big. Having already achieved world recognition for standup paddleboarding, the Molokai native is busy looking to his future. The 36-year-old father of two is currently working on a few screenwriting projects, developing his own brand of apparel (“EK”), planning a move into politics, and on Saturday, Kalama debuted his very first album, “Dare to Dream,” at Hotel Molokai.

Six years ago, Kalama left his stable job at the Kaunakakai Fire Station to pursue his two passions in life –surfing and music. In 2009, he won the World Cup of Stand-Up Paddle racing, held in Hamburg Germany in both the 2000 meter sprint and 10,000 meter distance races. One month later, Kalama won his first solo race, in record time, in the 32-mile Rainbow Sandals Molokai to Oahu Paddleboard Race Stand Up Paddle division.

Since then, Kalama has surfed all over the world with legends like big-wave surfer and mentor Laird Hamilton, who gave Kalama his very first paddleboard. His idea of a perfect day still is a day spent “surfing at my perfect spot with a few friends.”

“Surfing is my first love,” he said. “For me, surfing is an art…I get the most satisfaction from just doing it for the love of it.”

While surfing may be his first love, music has also captured his heart.

“I achieved all my surfing dreams, and now I’m realizing the second part of the dream,” he said.

That dream has materialized in the form of his first debut album which features 12 original tracks, all written by Kalama, spanning a range of musical genres from pop to reggae. His music speaks about his life, his faith and his dreams. His title track shares a deeply personal account of the trials and tribulations that have enriched his journey so far, from leaving the fire department to his brush with fame. Another song on the album, “Stay in the Light,” was written to address the issue of suicide on Molokai after Kalama’s own cousin committed suicide.

Growing up on Molokai has instilled within Kalama a strong tie to the land of Hawaii, he said. He feels a deep connection and need to preserve Native Hawaiian ways.

“There’s a big demand for Hawaii these days,” he said. “I want to expose Hawaii as true aloha, not a postcard but as something that is real and exists today.”

“He’s an individual leader, and he always did what he wanted to do,” said Molokai resident Thad Camara. “He is a great role model and he makes Molokai proud.”

Friend and cameraman Adam Ireland, who has been traveling with Kalama for the past four months, said he takes lessons from the Molokai dreamer every day. “I’ve learned that you have to believe you’re the best,” Ireland said. “You have to be sold on yourself or how are you going to sell to other people?”

Kalama is currently scheduled to tour and perform a few shows on the mainland in August. He is also currently working on writing a musical about Hawaii’s history that he hopes to someday see picked up at The Maui Theatre, he said. Additionally, the singer/song-writer is looking to get into politics in the future as well, so that he could “be a manager of this place and make some changes.”

With such a busy schedule ahead of him, Kalama stays grounded through it all.
“I’m glad I have Molokai because it won’t allow me to change,” Kalama said. “I’m still the boy that grew up down the street. This is my reality check.”

Kalama’s music is currently available for purchase on iTunes and at stores around Molokai. For more information, please visit ekolukalamusic.com.