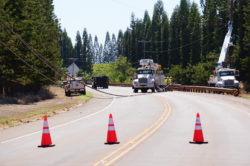 Electricity was out across the island last Saturday morning after a utility pole fell across Kalae Highway in Kualapu’u shortly before 7 a.m., causing downed power lines to lie over the road, which was closed for about nine hours.

“Preliminary assessments show that after a utility pole came down along Kalae Highway, it caused a fault on the electrical system and triggered a loss of power generation at the Palaau baseyard,” said Hawaiian Electric spokesperson Shayna Decker.

The outage affected all 3,200 electric customers on Molokai. A majority of the island’s electricity service was restored by crews around 11 a.m., but about 300 homes in Kalae remained out of power until nearly 4 p.m., when repairs were completed.

“To repair a downed pole and downed lines, crews typically dig a fresh hole and reset a new pole then work to restring the lines,” she said. “In this incident, multiple circuits were affected so it also took time for crews to check each circuit to ensure it was safe before we restored power to each area.”

Decker said the company is currently assessing what caused the pole to come down.

“However, even with routine maintenance, poles can also come down due to weather or trees falling on the poles or heavy branches on power lines that can bring down poles,” Decker said. 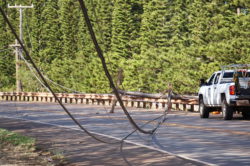 There was little wind at the time of the incident, and linemen working on the scene said it appeared the pole had just snapped.

Downed power lines can cause a potential safety for passing vehicles.

“If power lines are down on the ground, always assume the lines could be energized so stay at least 30 feet away — about three vehicle lengths away — from the downed lines. Do not touch the downed lines,” advised Decker.

Traffic cones blocked the highway just south of Kualapu’u as crews worked on repairs, while police barricaded the Kalae Highway entrance at the intersection of Maunaloa Highway.

“Thank you to the Molokai community for your patience and understanding as crews worked as quickly as possible to safely restore power to everyone,” Decker said.