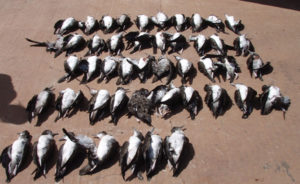 For the second summer in a row, dogs have invaded the Uau Kani, native wedge-tailed shearwater nesting site at The Nature Conservancy’s (TNC) Mo`omomi Preserve and have killed 109 nesting birds to date. Wedge-tails are most commonly known to help fisherman detect schools of fish at sea. Wedge-tails live their entire life in the sea, and only come to land to nest.

The event took place between June 7-9, 2012 and eye witnesses report that there are two dogs responsible for the kills. One dog is described as a pit bull type, while the other is described as a “hound” looking. The dogs were seen together fleeing the scene. One dog had a collar. The killing is especially disturbing, because the dogs have no interest in eating the birds, just killing them.

TNC will be taking steps to capture the dogs and remove them from the preserve. TNC is currently investigating several trapping methods for effectiveness and humanness, and is seeking help from the U.S. Department of Agriculture Wildlife Services on how to properly use potential trapping devices. TNC will also be investigating long-term strategies such as predator-proof fences.