Diving to the Depths of Safety 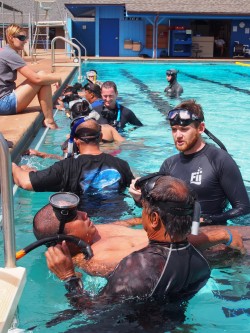 Martin Stepanek can dive more than 400 feet on a single breath of air. He’s set 13 freediving world records and knows more than anyone how dangerous the sport can be. But with the proper safety education, he said freediving has minimal risks — and with the goal of sharing that knowledge, he’s become a pioneer in modern freediving education. Last month, Stepanek visited Molokai to offer a series of safety courses free of charge to local divers.

Having been raised in Czech Republic, a country without ocean access, didn’t dampen Stepanek’s passion for diving, and when he was 20 years old, he relocated to the U.S. to pursue the sport more actively.

To dive 400 feet on a single breath of air is not something you’re born with, said Stepanek. It’s the result of a lot of training, and there’s not much time for anything else. Because he couldn’t make a living from the sport, he decided to share his knowledge after moving to the U.S.

“The whole attitude that it’s a game of luck or fate was unacceptable,” said Stepanek.

So he set about to change that perception, starting an organization called Freediving Instructors International (FII) to educate divers about safety and proper dive techniques by using their own inborn reflexes.

Body Smarts
Those natural responses, said Stepanek, called mammalian dive reflex, are something that everyone is born with but without regular practice, they become weak.

Infants’ bodies will naturally turn over in the water so their airways are clear, explained Stepanek. But the bodies of adults normally float face first, requiring someone to be there to turn them over and assist by ensuring the airway is clear of water.

Sensors around our faces can sense when we’re submerged or face up even when we’re unconscious, Stepanek said. When we’re face down, the body automatically closes our vocal chords so we can’t take in water. At this point, our body shuts down non-essential functions to save brain function. This state is known as black-out.

The length of time our body can remain in black-out before taking a final breath known as a “terminal gasp” varies depending on factors such as age, water temperature and physical fitness, according to Stepanek. Young children are more likely to survive unconsciousness in the water — Stepanek said he’s heard of a 3-year-old going 47 minutes in black-out without brain damage — because of their strong mammalian dive reflex.

“We just show them how to use their bodies,” Stepanek explained.

Stepanek said many Molokai residents are already accomplished divers, so the focus of the Molokai course wasn’t on developing breath-holding capacity, but on safety.

The only way to survive a black-out is if our airway is clear — and that requires the assistance of a buddy.That’s why one of the most important things the FII team teaches is to dive with a buddy system.

“When you go out and spearfish, always go in a buddy team and stay within arm’s reach of your buddy when they surface,” said Stepanek. “Always be aware of where they are and only one person should be diving at a time.”

Stepanek said 90 percent of all cases of loss of consciousness happen on the surface. Even after a diver takes a few breaths, black-out can take place because oxygen takes time to reach the brain. He said it’s a common misconception that most black-outs happen at the bottom of the dive.

A Deep History
On Oct. 28, the week’s events kicked off with a history lesson on diving in Hawaii from former Olympic swimmer, legendary spear fisherman and diver Sonny Tanabe of Hilo.

“No one really knows how spearfishing got started,” said Tanabe, adding that historically any civilization living along the coastline utilized the ocean as a food source. Using long wooden spears, Hawaiian divers explored the underwater world to collect food.

When soldiers arrived with bayonets in the 1890s, Tanabe said, divers began using half wood, half steel spears. And when rubber made its first appearance in the mid-1900s, the “Hawaiian sling” — a short, hand-held spear using rubber tubing for projection — gained popularity throughout the South Pacific. Later, a hinge was often used for the trigger mechanism, creating a handgun-like spear.

Tanabe also brought a selection of historic Hawaiian swim goggles made of hollow woods such as bamboo, with glass inserts, which he showed to the audience, as well as the first underwater light used for night lobster diving, encased in black rubber tubing.

Putting Knowledge into Practice
Each of the three courses during the week on Molokai offered classroom instruction followed by hands-on learning in the Cooke Memorial Pool. Six FII instructors and crew members came from Hawaii and the mainland to offer the training.

“From the least experienced novice to some of Molokai’s most respected old time divers, all walked away with new safety knowledge and skills,” wrote Ka Honua Momona event organizers Kauwila Hanchett and Lindy Helm afterward. “Best of all everyone had a blast too!”

With the support of Maui County staff, and the co-sponsorship of nonprofit Ka Honua Momona and Molokai Fish and Dive, which provided dive equipment for use during the course, FII instructors donated their time to offer the safety training on Molokai free of charge.

For 12-year-old Buck Aselin, the course’s youngest participant, the best part was “practicing at the pool with the instructors.”

“I enjoyed that the instructors encouraged me and told me I was good at the [safety] routines,” he wrote in a review of the course.

“[For me, the best part was] learning things that could save other people’s lives,” said participant Maihilahila Hornswill. “This program is awesome!”

“It has helped me to be a better and safer diver,” said another participant, Dicky Stone. “Anyone who dives or is involved in the ocean should take this class.”

The week garnered so much interest and positive responses that FII instructors said they want to come back to offer more training on Molokai in the future.

“Self-sufficiency is one of the things I love about Molokai,” said Stepanek. “There’s a lot of spearfishing here and I know how dangerous it can be without training. Our inspiration for coming was finding a way to contribute [to Molokai].”