On the Saturday before Halloween at Paddlers’ Inn, seven local drag queens got the chance to break out their fanciest dresses and craziest dance moves for Molokai’s fourth annual Halloqueen celebration.

“The girls bring a very eclectic and vibrant energy,” said show attendee Leslee Florea, who sported pink cat ears and a long tail as part of the audience costume contest. “Their passion for what they do is endless and fabulous.” 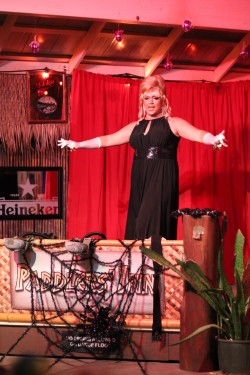 The show included a runway-style strut through the bar, lip syncing performances and elaborate dances to popular songs from such artists as Beyonce and Nicki Minaj. Audience members also participated in a costume contest and a raffle.

Molokai local Kraig Lucas, who goes by the stage name Kalaika DeReon-Lamour, started Halloqueen four years ago after the Molokai Ultimate Diva Pageant, a drag queen showcase and competition, came to an end.

“Since it died off, I wanted to do something annually for the island,” said Lucas, a hairstylist who’s been doing drag since 2009. “I figured, why not Halloween?”

Drag queen and Oahu resident Alara Deschanel, who’s performed at every Halloqueen, said the event started in a backyard and grew from there as more people wanted to attend and participate. Maui native Anastacia Colby-DeZsanreo, a two-time Halloqueen performer, said she loves the community’s support and ends up finding new relatives every time she visits Molokai. Performers also included Molokai’s own Missty Blue and Betty, as well as Keara Lamour and Zanaya Daniels of Oahu.

“I think through the expression of our art, we can try to find a balance between our equal rights and our freedom of expression,” said Deschanel, who doesn’t personally identify as transgender but falls under the category by performing as the opposite sex. “…  [Drag] is our American duty. If people can carry guns, I can carry a wig.”