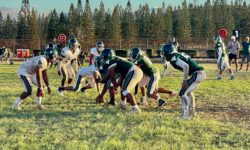 Head Coach Mike Kahale and his staff and players were happy to be out on the field again.

“It was an exciting scrimmage and a great opportunity for our boys to play at ‘game’ speed and intensity,” he said. “It was a defensive battle with Team White prevailing in a 8-6 victory.”

Nakoa Orlando scored on an outside run for Team Green and Clarence Tanabe caught a long touchdown pass from Angelo Duvachelle for Team White.

Kahale was hoping for some Maui Interscholastic League games after 19 months of no games, but got some disappointing news.

“Our scrimmage was supposed to get us ready for Lanai next weekend but unfortunately we just found out that Lanai has just dropped their program for the season,” he explained. “Hana pulled out from league play a month ago. The new athletics mandate [for COVID vaccinations or exemptions] has had far reaching effects, essentially cancelling the seasons for Hana and Lanai and Molokai by default. This is so sad and disappointing for our boys. They have worked so hard, coming to practice each day, putting the time, effort, and energy both on the field and in the classroom.”

Another Green and White scrimmage within the MHS team is in the works and Kahale is still holding out hope to get a real game for his team.

“This leaves us scrambling to find a non-league opponent game to just give us a chance to compete against someone else besides ourselves,” said Kahale.

Prior to the pandemic, Molokai had won five straight MIL 8-Man Football titles. The program is growing and doing well.