“Never in my wildest dreams” did Molokai High School librarian Diane Mokuau believe she’d be the winner of the prestigious national School Librarian of the Year award.

“Just the fact that you say I qualify for this is enough — there’s no way I’m going to win this,” Mokuau said she told Molokai Public Library Branch Manager Cynthia Delanty, who nominated her. 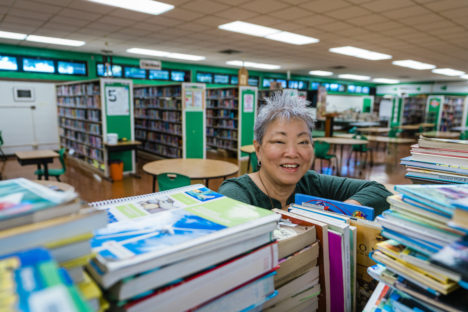 But win it she did, along with a middle school librarian teacher from Louisiana.

“I am deeply humbled and greatly honored to receive this prestigious award,” said Mokuau. “This highlights the wonderful things that are happening in our schools and our communities and especially spotlights our tight-knit community on Molokai. I plan to share our challenges and successes and the need for every student to have certified librarians in their schools.”

Each year, the School Librarian of the Year Award recognizes K-12 library professionals for outstanding achievement and the exemplary use of technology and services to engage children and teens toward fostering multiple literacies, according to the School Library Journal (SLJ), which presents the awards.

“This recognition is especially important as librarians nationwide have undoubtedly stepped up to support students, families, and educators through a year unlike any other,” stated an SLJ press release. “Amanda [Jones, the other awardee] and Diane have gone above and beyond to keep opportunities for literacy at the center of their students’ lives while navigating the many unforeseen challenges presented by the COVID-19 pandemic.”

Mokuau has been working at the MHS library since 2002, where she has done much more than assist with research resources. As the first National Board Certiﬁed Teacher librarian on Molokai, she has spearheaded life-changing initiatives for students. She helped found the Molokai College and Career Tour Club, which offers travel opportunities to high school students to visit East Coast schools to experience campuses and cultural sites most wouldn’t otherwise have the chance to see firsthand. Many participating students have gone on to attend four-year colleges and get their degrees.

She has cowritten a million dollar grant application to develop the Molokai LIVE 21st Century Learning Center program on Molokai, which affords hundreds of students with enrichment and after-school learning opportunities. Most recently, she wrote a grant that got Kindles for elementary students, to supplement the resources available for schools that don’t have their own libraries. She’s now working on a partnership project that would digitize and preserve Molokai’s maps and other historical and cultural resources.

One of her many projects that she’s most excited about is a group she formed called the Molokai Library Services Cadre, which began as an informal collaboration between librarians on the island to help each other and share expertise. Mokuau said the group got its start when Delanty first came to the island to take on leadership of the Public Library a few years ago and did a presentation at the high school. A few librarians got dinner together afterwards, and now the Cadre is comprised of eight on-island librarians from Molokai school libraries as well as the Native Hawaiian Library and Alu Like. The support and resources they provide together is now attracting statewide partnerships as well as inspiring local youth and others to become librarians.

“Other organizations are asking us to partner with us –- that’s not normally something that would happen for Molokai,” said Mokuau of the Cadre. “It’s so huge for us to be considered a player, we’ve put ourselves out there.”

With her library closed much of the past year during the pandemic, Mokuau collaborated with teachers to share research for project-based learning that have tackled issues like social injustice and “Tweeting for change.” She’s also fostered a literacy through reading program at all Molokai schools that provides nonfiction articles at each students’ reading level.
In addition to the many programs she’s involved with or helped found on Molokai, Mokuau has received numerous recognitions for her work, including being named the first National Board Certiﬁed Teacher librarian on Molokai, NEA Foundation’s Hawaii Teacher of the Year Award in 2019, and a Golden Key Award recipient from the Hawaii Association of School Libraries in 2016.
Though her most recent award is well-deserved, Mokuau is quick to pass on the recognition.

“It is really about the relationships,” she said. “This isn’t my award, this is for everybody. I don’t do anything on my own…. It’s just spotlighting that good things are happening even though we’re a small, rural school. It highlights the close knit community that we have that we’re able to do these kinds of things.”
Both 2021 School Librarian of the Year Award winners will be featured on the cover of the April 2021 issue of School Library Journal. They will also each receive a suite of awards from Scholastic, including a $2,500 cash award and $2,500 in-kind digital and/or print products for their libraries, in addition to a visit from John Schumacher, the Ambassador of School Libraries for Scholastic Book Fairs, who will gift one book to every student, and a Scholastic Book Fairs “Mr. Schu’s Picks” collection of books for each school’s library, according to the SLJ.