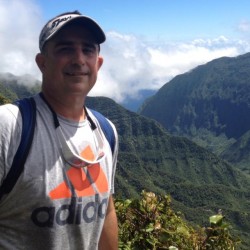 He stepped in temporarily in August after former AD Hoku Haliniak left to accept a position as Director of Sports Information for the Hawaii High School Athletic Association. DeRouin was one of five candidates being considered for the AD job, according to Daniel Espaniola, who was on the selection committee.

“He’s new to the job but he has tremendous potential for growth in the position and making good things happen for the school,” said Espaniola, who works for the Department of Education as an Educator Effectiveness System Educational Officer.

DeRouin has nearly 20 years of experience coaching in Hawaii. He formerly coached the Molokai boys’ basketball team and has been the MHS girls’ basketball coach for the past three years. Maui News named him the Maui Interscholastic League (MIL) Division II Coach of the Year in two of those seasons. He’s also taught biology, physiology and environmental science at the high school.

When he stepped in for Haliniak in August, DeRouin said the Molokai position is “probably the most challenging AD in the state.”

“All athletic director jobs are challenging, however … being isolated from the other schools in the MIL requires us to plan travel that is unique to many other schools, not only in Hawaii but nationally,” he explained.

The athletic department basically “operates like a small college,” with lodging and transportation to arrange for most away games, as well as for opponents that need to stay on Molokai for weekend games, he said.

One of DeRouin’s goals as AD is finding an athletic trainer for the high school after the former trainer left last year. He also hopes to establish the judo program this spring and help the school host more MIL tournaments. This season, the school hosted the girls’ volleyball championships and will host the boys’ basketball tournament next month. Athletics funding is also a big focus for DeRouin.

“I hope to work with our legislature to find a way to better support Molokai High Athletics financially to narrow the gap between our allotment and actual cost of athletics travel,” he said.

Espaniola, who used to teach social studies at MHS, said DeRouin knows how to connect with students as both a coach and a teacher.

“His strength was really forming and bonding relationships with students,” said Espaniola. “… He cares a lot about the school and the students.”