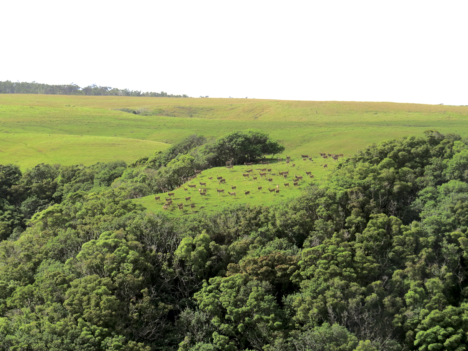 It’s no surprise to many Molokai residents that the island is overrun with axis deer. Recent footage from a helicopter during an aerial survey of Molokai by Dept. of Land and Natural Resources staff captured massive herds of deer moving across the land like tiny ants, confirming the environmental damage being done by overpopulation of the nonnative species.

“Cattle ranchers have been the hardest hit,” Molokai’s James Espaniola, a Forestry and Wildlife Technician with the DLNR Division of Forestry and Wildlife (DOFAW) said, as he pointed out the helicopter at barren ground. “They do their part in rotating the use of pasture lands to prevent overgrazing by moving their cows around. Unfortunately, the deer remain, and they devour any living vegetation, which doesn’t allow for plant regeneration.”

“Axis deer are spreading further into the deep valleys and remote ridges, where they trample and eat plants. They spread invasive weeds,” said DLNR Chair Suzanne Case. “We need to protect our native forests because they capture rain and cloud moisture, replenishing freshwater streams and underground water sources. When hooved animals, all of which are not native to Hawaii but were introduced by foreigners, turn these ancient forests into bare ground, the steep mountainsides rapidly erode which deposit mud on beaches and coral reefs.”

Footage shows Molokai’s south shore waters chocolate brown, extending hundreds of feet offshore from runoff, highlighting erosion caused by lack of vegetation from thousands of deer. Though recent rains helped alleviate extreme drought affecting much of Molokai, the soil — hardpacked from deer combined with a lack of groundcover and healthy trees to slow rain penetration — wasn’t able to absorb it all, resulting in the heavy runoff onto the reef.

Extending into November, portions of Molokai had been in “exceptional drought,” according to the U.S. Drought Monitor map. However, last month was “one of the Decembers in the last 50 years,” said Kevin Kodama, senior service hydrologist with the National Weather Service in Honolulu.

A rain gauge in Kaunakakai measured 6.41 inches of rain in the month of December, more rainfall than that gauge has in December since 2000. Molokai’s Puu Alii gauge measured 9.28 inches of rain between Dec. 5 and Dec. 8.

Kevin Kodama, senior service hydrologist with the National Weather Service in Honolulu, called December “one of the wettest Decembers in the last 50 years.” The NOAA Climate Prediction Center says rainfall and temperatures could be “above normal” through the spring, bringing good news for Molokai’s drought-damaged landscape. 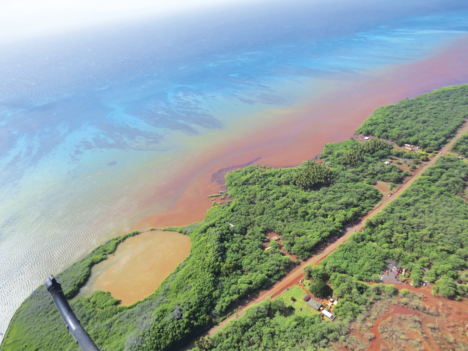 But that won’t solve the deer issue on Molokai and Maui, and Hawaii lawmakers and community are trying to come up with answers.

DLNR says one of the most effective ways to keep axis deer out of forests is fencing. However, much of existing fencing around forest areas was originally built to keep out goats and pigs, and is now being retrofitted to extend to an eight-foot height to prevent deer from easily jumping over, according to DLNR.

“Protection of the state’s native ecosystems and watersheds is our core mission and we currently have more than 100,000 acres of those lands [in Maui County] fenced with effective deer control in place,” said Scott Fretz, the DOFAW Maui Branch Manager. “However, that still leaves a lot of lands outside our management areas in need of better control. This is especially true for lower elevation areas where deer impact communities and agriculture and cause erosion that fouls marine habitats. Solving that bigger problem is going to take broad collaboration with stakeholders. The renewed efforts of the Maui Axis Deer Task Force led by Maui County Council Member Yuki Lei Sugimura are a very positive step in that direction.”

In coordination with the county Task Force, DOFAW staff is working to improve control through population-based spatial planning and increasing opportunities for deer harvest. Additional funding for deer control from state and county sources is being used for fencing, harvest and watershed protection, according to a DLNR release.

Over the last two years, in addition to devastation of crops, the combination of drought conditions and deer overpopulation caused hundreds of deer to die on Molokai, particularly on the west end. Large pits were dug to bury carcasses collecting along roadsides and in people’s yards.

“This extension allows for the continued deployment of resources to adequately address this issue in the affected areas on Maui, Molokai and Lanai and find more permanent solutions,” said Molokai’s Sen. Lynn DeCoite.

While it’s unclear what agency will ultimately take the lead in spearheading long term deer solutions, one thing is clear: it will take everyone’s cooperation.

“In order to get to that manageable population size, it’s going to involve the State and entire communities,” said Espaniola. “A lot of people are working on this problem, and we are beginning to see better progress.”