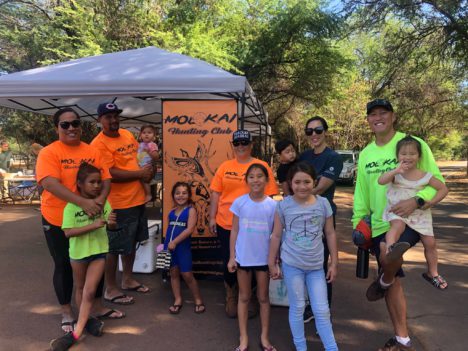 On Dec. 10, Molokai Hunting Club held a Holiday Deer Meat Drive to provide venison to the Molokai community and honor the fifth reigning monarch of the Kingdom of Hawaii, King Kamehameha V, who introduced axis deer to Molokai.

More than 100 households were reached during the giveaway, held at Project Coordinator Troy Tancayo’s house.

“The first hour was for kapuna. At La Pilina, many kupuna were saying how they grew up with deer meat, and now they don’t have that in their household anymore,” said Keo Hirata, interim PR at Molokai Hunting Club. “We had a lot of families come and about 20 Molokai Hunting Club members to help to distribute the meat that day.”

Dependent on family size, the distribution ranged between six and 20 pounds per ‘ohana. Molokai Hunting Club members said they distributed 376 quarts, or approximately 940 pounds, of fresh and frozen ground meat and 78 gallons of whole meat. An additional 30 quart bags of meat were donated to the UH Maui College-Molokai Campus for their end-of-semester grab-and-go drive for all students, staff and their ohana.

According to club members, the majority of the meat provided in the drive was from club hunts in the first week of December. These hunts were held at Molokai Homestead Livestock Association/Redhill, Pu’u ‘O Hoku Ranch, and Kainalu Ranch during night and day.

Dec. 10 was chosen to help the community to prepare for the holidays and ‘ohana gatherings, but also for another significant reason.

“The reason we chose that date was because we wanted to honor… the ali’i who released the deer on the island to provide the food recourse for all of us,” said Vice President of the Molokai Hunting Club, Jason Imada.

King Kamehameha V, Lota Kapuāiwa Kalanimakua Aliʻiōlani Kalanikupuapaʻīkalaninui, introduced the axis deer to Molokai in 1868. His birthday as well as his passing fell on Dec. 11. The club held the dive with the acknowledgment that axis deer continues to be a priority food source for the Molokai community, with ongoing management.

The hunting club’s mission is to empower the community through deer population management with a healthy, sustainable balance between aina and fauna.

The hunting club would like to mahalo the community for coming out, all hunting club members who helped hunt and volunteer, and Sust’ainable Molokai. They also want to appreciate the landowners that gave them land access to hunt for deer.