David Rapanot on the Road to His Dreams 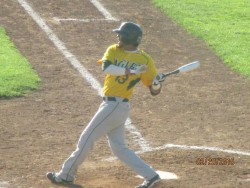 Molokai High School 2014 graduate David Rapanot is in his first year of college at Feather River College in California. As a freshman, he is the starting shortstop for the Golden Eagles and is having a fantastic season while doing a great job stepping up to the next level.  Born and raised on Molokai by parents Scott and Kim Rapanot, he has played baseball since he could walk with the guidance of his father as his coach. He is now making his family and all of Molokai proud.

Feather River College is located in Quincy, Calif., a little town north of Sacramento across the border from Reno, Nev. The Golden Eagles are leading the California Golden Valley Conference with a 26-8 overall record and 20-3 conference record. Feather River has a four-game lead in the conference over Butte College.

The Golden Eagles are coached by Terry Baumgartner. He is in his eighth year as coach and has won eight straight Golden Valley Championships.  They have also hosted the regional playoffs eight straight times. In the past seven seasons, the team has had a record of 224 wins and 69 losses. Eight of his players have been drafted to the major leagues and 45 All-Conference players have been selected from his teams.

“I love my coach. He’s a good understanding guy,” said Rapanot. “He loves Hawaiians and he’s a good coach. “

His coach also has great things to say about his shortstop.

“David is having a very good freshman season. He comes to practice every day wanting to get better and has improved a lot during his seven months here,” said Baumgartner. “If he continues to develop over the next year he will have a chance to be a Division I player and a professional prospect. We have already had numerous pro scouts inquire about David. He is continuing the long tradition here at FRC of Hawaiian players coming into our program and being successful.”

While at Molokai High School, Rapanot was the second Farmer in school history to be named The Maui News MIL Boy Athlete of the Year. He was also an All-Star in basketball and eight-player football. Many people on Molokai know him as “Tuff,” the nickname his family gave him after he fought pneumonia as an infant.

Now, Rapanot said he is getting used to college life and taking baseball to the next level. He is currently enrolled in 18 credits per semester and doing well in his classes.

“I am adjusting pretty well, but the weather is a big factor,” said Rapanot. “It’s really cold and very different from back home.”

Rapanot added, “The facilities here are very nice. We have outdoor cages and indoor cages for when it’s raining. Our field here is a lot nicer than back home and the scenery is nice here also.”

For Rapanot road trips in California are also a big change.

“On our road trips we travel a long way by bus, but you can’t even compare it to the ferry because the ferry was two hours and sometimes we travel for eight hours on the bus,” said Rapanot. “We stay at hotels and the past few trips the hotels have been real nice. So it’s a lot different from sleeping in the gym on Maui.”

Rapanot has the same dream he has always had.

“Since young kid time I have always wanted to play professional baseball,” he said. “That’s my dream and I am pushing forward for it.”

In a new series, the Dispatch celebrates former Molokai athletes who have taken their homegrown skills to new stages off island. If you know of a Molokai athlete competing at college, the professional level or elsewhere, let us know by emailing editor@themolokaidispatch.com or calling 552-2781.

One Response to “David Rapanot on the Road to His Dreams”