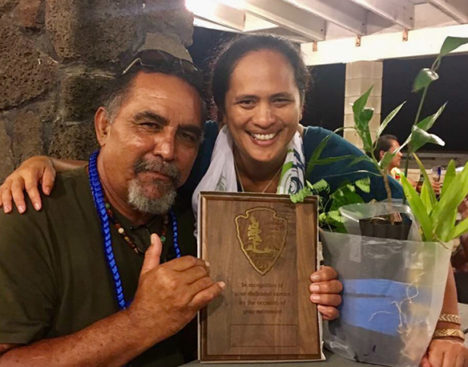 David Ainoa Jr. with his plaque from National Park Service, with Mikiala Pescaia

David Ainoa Jr., son of David and Vivian Ainoa, has announced his retirement after working many years for the National Parks Service at Kalaupapa National Historic Park.

“This announcement comes with mixed feelings as we say a heartfelt ‘ALOHA’ to one of our employees. David Ainoa Jr. has been an employee of Kalaupapa National Historical Park for the last seven years of his career, and he has decided that the time has come to retire,” states an NPS news release.

David began his journey with NPS as a Maintenance Worker for the Facilities Division, according to NPS.

“Dave took on the seemingly insurmountable task of addressing the NPS’s automotive and equipment fleet,” said Erika Stein Espaniola, superintendent at Kalaupapa National Historical Park. “In a marine environment that depends on an annual barge for large goods and services, this is no small feat! Throughout his career in Kalaupapa, Dave was always a team player and a pleasure to work with. I’m very happy for Dave and his family and wish him the best in his retirement!”

With his mechanical expertise, David filled in as the Park’s mechanic and repaired small and large equipment. He helped the Park’s fleet exceed in several areas, according NPS. Additionally, he has helped train several staff members in this area, passing his vast knowledge onto other employees.

“The department and our work would never have been so excellent without (David’s) guidance and vision of service. David has contributed seven years of service to Kalaupapa, and his achievements and love for the community will not be forgotten. We’ll keep you in our thoughts and hope that your retirement is all that you deserve,” NPS states.