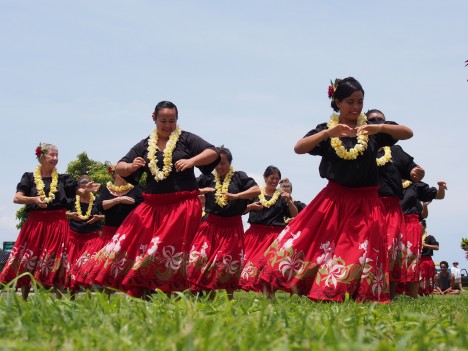 Ancient Hawaiians used winds to recognize and heed messages of warning, blessings and things to come. The 23rd annual Ka Hula Piko festival brought the Molokai community, along with visitors from around the world, together to celebrate hula traditions and how Hawaiians today are connected to kupuna of the past through the elements.

“The wind and the elements are so important in our lives and our ancestors made connections to them…that taught us to mind the protocol and be aware of these elements when they are in action,” said Elsie Ryder, ho`opa`a, or chanter, of Halau Hula O Kukunaokala. “Our ancestors and Ke Akua communicate with us through the elements.”

This year’s theme for the event was “Ku I Ke Kiu,” honoring the northwestern Kiu wind, or scout wind, that welcomed travelers to Pu`u Nana, the birthplace of hula, in the ancient days. Hawaiians built an intimate relationship with the winds which helped them to farm, fish, navigate. Caring for the environment is a kuleana Hawaiians can share through hula, according to Ryder.

“Be sensitive to the sea, the breeze, the rain and understand what is happening around you,” she said. “That protocol will teach [younger generations] how to act because they were taught from their kupuna to respect the earth through the hula traditions. It’s through the hula that we are able to express the love of our ancestors.” 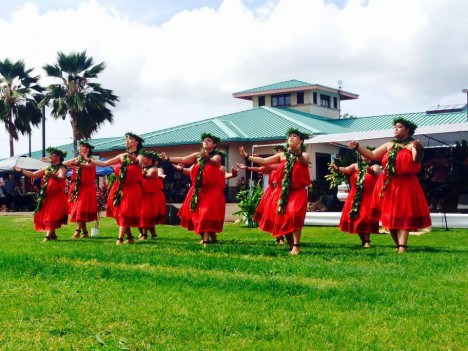 Through ancient Hawaiian hula, oli and mo`olelo, attendees were immersed in Hawaiian culture and the celebration of hula’s origins during the three-day event.

“Here we are on Molokai where, according to our traditions, hula began,” said Ryder. “If you look at the island chain Molokai is the piko. It’s the center. It connects all the islands. Ka Hula Piko acknowledges those progenitors that kept records of the past, preserved it thorough hula and oral chant traditions and handed it down through generations.”

According to legend, hula was born on a sacred hill at Ka`ana, and the art of the dance was later spread throughout Hawaii by the goddess Laka.

“We honor Molokai as the birthplace of hula, however we understand Laka did travel to the other islands and that every island has their own rich traditions,” said Dion Dizon, alaka`i for Hula Halau Kukunaokala and volunteer organizer. “By inviting kumu hula from other islands… [Ka Hula Piko provides] a broad experience for the general public in terms of educating people.”

Ka Hula Piko — founded by the late Kumu Hula John Kaimikaua in 1991, whose ohana is from Molokai — kicked off this year with a cultural excursion to Ka`ana and a series of lectures from esteemed kumu hula on Thursday and Friday. 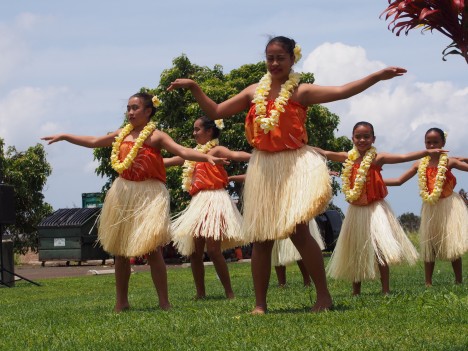 On Thursday, Molokai’s Anake Opu`ulani Albino shared personal anecdotes on her hula traditions and the Hawaiian protocols she grew up with.

“Hula is the natural environment. Hula is life,” Francisco said. “Unlike any other form or style of dance, hula is our connection to our kupuna, to our present, and to our future.”

With each passing year, Ka Hula Piko not only celebrates hula but also attracts more guests and businesses that support Molokai’s economy.

“I’ve been participating since [Ka Hula Piko] was out on the West End…and it’s wonderful,” said Linda Johnson of Moana’s Gracious Ladies. “This year it seems like there’s a lot more people, booths and I’ve walked around to see all of it. It’s really growing.” 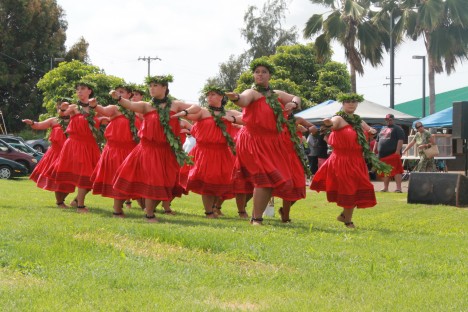 For local vendors, crafters and artists, it’s a chance to share their merchandise with international buyers.

“They’ve timed this perfectly because it’s right when things start to drop off, the snowbirds have left and we need a good economic boost,” said Ani Van Eps, of Ani Van Eps Fine Art, who has been a vendor at the event for a decade.

“He wanted to spread aloha throughout the world and he did by bringing people here for [Ka Hula Piko] and teaching them about hula, the culture and the sacredness of it,” she said.

For many, the annual event offers an opportunity to honor the past.

“If we’re able to bring hula back to the very beginning, to the basics, that’s where we maintain gratitude and appreciation for how far hula has come,” said Dizon. “Never forgetting where you come from is important.”