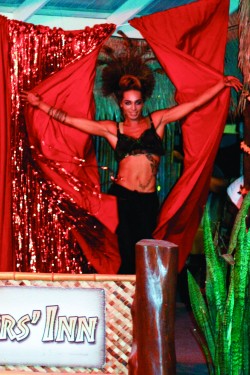 The talented divas of the third annual Halloqueen drag show provided a little extra eye candy last Saturday night for audience members at Paddlers Inn. In addition to fabulous performances and high energy routines by off island and local performers alike, the show also consisted of hilarious commentary, an audience costume contest and a raffle.

Pictured to the right, Molokai’s own Missty Blue stole the show with an elaborate costume and vivacious performance to Selena Gomez’s, “Come and Get It.”

Craig Lucas of The House of DeReon, organizer of the event and MC for the night, was pleased with the turnout and said the show was even better than last year’s. He also wanted to extend a special thanks to Paddlers Inn for supporting the event each year.