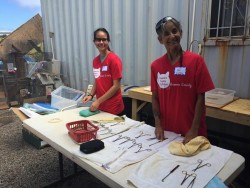 “Whether we want them to be or not, the cats are part of our environment,” said MoHS Executive Director Hoala Davis. “It’s a matter of trying to control the population that’s here.”

MoHS partnered with Animal Balance, a nonprofit organization of veterinarians and volunteers that bring animal sterilization programs to islands around the world.

“Islands are generally closed systems, so the goal is to prove that this strategy of sterilizing animals works to reduce the populations humanely and therefore help all species that live on the island,” said Animal Balance founder and director Emma Clifford.

Each day last week from 6 p.m. to 1 a.m., teams set large, humane wire traps in areas of high feline traffic. The cats were taken to MoHS headquarters in Ho`olehua, where veterinarians performed spay and neuter procedures. The animals spent the day recovering before being released. Residents can identify spayed or neutered cats by a tipped left ear.

Clifford said the goal is to “encourage people to use those tools and to replicate the program after we leave.” Animal Balance brought Humane Society staff and community volunteers many new techniques for trapping.

For example, before performing surgery on the cats, vets have to empty the animals’ bladders, explained Clifford. Urine from cats in heat attracts other cats and was used in the trapping process, which Davis said she “never would’ve thought of.”

“It’s nice to change things just a little and see how successful you can be,” said Davis. “Putting food in white [easy-to-see] containers, so you’re hitting on all of the cat’s senses. We’ve used smelly food. But you want them to see where the food is.”

Davis said they went door to door to inform the community about the program and had mostly positive feedback. On Molokai and in general, the main concerns pet owners express about spaying and neutering are health risks and behavioral changes, according to Davis. 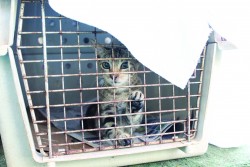 A cat recovers after surgery. Photo by Colleen Uechi.

However, the American Veterinary Medical Association says “the overall incidence of complications is very low,” and the sterilization procedure can even lessen the risk of breast or testicular cancer in cats. Sterilization also “has no effect on a pet’s intelligence or ability to learn, play, work or hunt.”

According to the American Humane Association, spaying and neutering can help prevent overpopulation, animal abandonment and the spread of diseases.

“I didn’t know we had that many cats on the island,” said 14-year-old Elisabeth Kaneshiro, one of nine Molokai volunteers. “… If we stop them now, we won’t have too many. We won’t have to worry about abandoned kittens [in the future].”

While there’s no exact count of Molokai’s cats, Davis said they had community members keep track to help identify high volume areas. During the clinic, they focused on Kaunakakai and Ho`olehua, though some residents also brought in cats from the east end.

“I’m really pleased with the community,” said Animal Balance medical director Mike Greenberg. “They jumped right in with whatever we needed. I’m excited because … the folks who live and work here can keep the momentum going.”

Davis said future campaigns will depend on funding and resources. MoHS has limited traps but is working to acquire more.

“We’re hoping this is something we can continue doing,” said Davis. “… We’ll take the information [from this clinic] and use the knowledge to continue the program.”