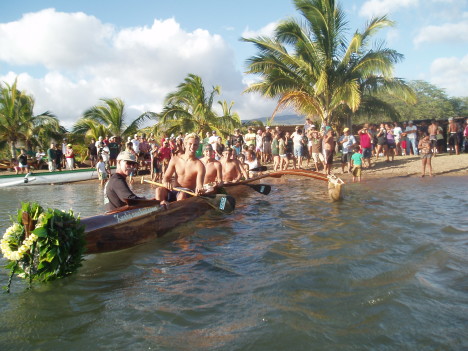 Since ancient times, outrigger canoe racing has held an important place in Hawaiian cultural traditions.
According to Tommy Holmes in “The Hawaiian Canoe,” excelling in canoe races was of great importance historically, and special status and recognition was given to champions in the sport. Today, the tradition is carried on each summer as paddlers from around the state compete to represent their islands at the Hawaiian Canoe Racing Association state race.

Historically, canoes were carved from a log of the endemic koa tree, but now, canoes are often made from fiberglass or other manmade materials. However, only wooden koa canoes are used to compete in the state event.

“We paddle in koa canoes, no glass canoes [allowed],” said Bo Campos, HCRA race director. “It’s always been only koa canoes at state races…. We keep the tradition alive… it’s our job to maintain the culture.”

“One of the special things of being at the state championship races is seeing all of the beautiful koa canoes lined up on the beach, side by side, glistening in the sun,” she said. “It is a lasting experience to paddle in one of these treasures, many of them legendary.”

One of the most famous koa canoes is the “A`a” commissioned by Prince Kuhio and built by Henry Weeks in 1902. Prince Kuhio wanted the fastest racing canoe in the islands, and the A`a won many races between 1906 and 1910. In 1906, he sent the canoe from Kona to Honolulu, where its crew beat the competition and returned to win again the following year, in front of a crowd of 10,000 people, according to Holmes. The A`a is now displayed in the Bishop Museum.

Molokai got its own koa canoe in 2009, for the first time in more than 30 years. Named Kuaha`amakealapono, Liko Wallace of Molokai Canoe Club explained “Kuaha`a” describes the humble and proud people of the Molokai `aina, while “Ke Ala Pono” refers to the righteous path we each strive for, and the representation of the wa`a and where it will take its paddlers. Shared by the island’s four canoe clubs, the koa canoe is proudly used by Molokai’s crews at state races.

Molokai also celebrates another paddling tradition each year. Historical records dating back to 1865 note the annual la kulaia, or days of festivities honoring the Kingdom of Hawaii and the monarchy, surrounding outrigger canoe race competitions, according to the Molokai Canoe Festivals Committee. After the overthrow of the Hawaiian Kingdom, the tradition of Kulaia was lost. Although the Molokai Hoe and Na Wahine O Ke Kai races across Molokai’s Ka`iwi Channel became the most challenging and acclaimed events in the world, many noticed that a spirit of togetherness between visiting paddlers and the Molokai community was lacking.

Wanting to revive the spirit of the historic Kulaia festivals here on Molokai, the Molokai Canoe Festivals Committee was formed with the vision of sharing Molokai aloha and hospitality to visiting members of the paddling `ohana.

“In recent years… the idea of Kulaia was forgotten, as the canoe races continued without the festival,” said Committee members. “This practice of Kulaia is an important cultural tradition that connects us to our ali`i and our kupuna.”

This year for the third time, Kulaia will be celebrated in coordination with Na Wahine o Ke Kai in September. The festival, held on the Friday evening before the race, closes down the main street in Kaunakakai to feature food, vendors, music, cultural education and paddling related celebrations in the spirit of unity.