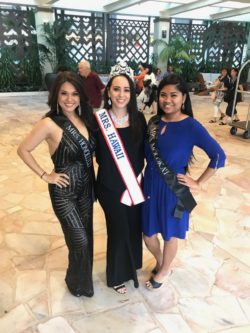 Miss America may be a well-known title but on the Friendly Isle, the first Mrs. Molokai in recent years has been crowned. Desirae Mendija will soon be taking the pageant stage as Mrs. Molokai competing for the title of Mrs. Hawaii America.

“It’s always been a dream to be Miss Hawaii,” said Mendija. She had run for the title several times but didn’t make it past the district level, so she decided to give up pageantry and get married. But when she heard about the Mrs. Hawaii competition, she was all in.

“The pageant features married women recognized as beautiful, talented, business minded, empowering women who are career and family-oriented as well as important contributors to their community,” she said.

Mendija fits the description perfectly. She owns Desi’s Island Gifts and manages Molokai Furniture. She also volunteers with Kualapu’u School’s VEX IQ program, where her husband Edwin is a coach. Additionally she serves as vice president on Molokai Humane Society’s Board of Directors, and is a full-time student majoring in business at UH Maui College, Molokai.

She is now the island’s first Mrs. Molokai, and because she’s the only contestant from the island, was automatically bestowed the title. Unlike Miss Hawaii, the Mrs. Hawaii pageant doesn’t include preliminaries so all contestants compete directly at the state level on Oahu.

Mendija has already made several trips to Oahu for public appearances with the seven other women competing for Mrs. Hawaii, and they will again gather for the state pageant on April 8. They will compete in three phases of competition: a private interview with a panel of judges the day before the pageant, a full-piece swimsuit segment, and finally the evening gown portion.

This will be the 27th Mrs. Hawaii State pageant, which is a preliminary to the national Mrs. America competition.

Mendija said unlike other pageants she’s participated in, Mrs. Hawaii is more of a sisterhood in which contestants seek to help each other succeed.

“I love that the pageant takes married women, mothers who normally put everyone else’s needs before their own, and gets them to focus on themselves for once,” she said. “I’ve watched my pageant sisters do things they’ve never done before like get pampered, take some time off and spend a little more money than normal on a beautiful dress. I also love that our husbands have to dress up and escort us during the evening gown phase.”

Mendija said one of the reasons she loves pageantry is it gives her an opportunity to get more exposure for Molokai organizations and local causes. She added that she wants to encourage others to participate in this experience.

“I hope by doing this I have opened a door for Molokai women to take advantage of this amazing opportunity,” she said of the Mrs. Hawaii pageant, which is open to married women ages 20 to 57 of all ethnicities. “Although the pageant may get pricey — especially having to travel — it’s a great way to get you out of your comfort zone, build self-confidence, and love yourself!”

There have been at least two previous Mrs. Molokais, sisters Cindy Manaois and Rhonda Negrillo, who competed in the Mrs. Hawaii pageant in the 1980s.

Mendija she is supporting local services as much as possible, such as getting her lashes and nails done for the pageant on Molokai. She’s also looking for support on her journey as Mrs. Molokai, and will hold the title through the end of 2018, during which time she will make appearances at local events.