Near the end of the season, interim cross country coach Manu Adolpho said that the Molokai boys’ goal was “becoming the MIL champions as a team.” 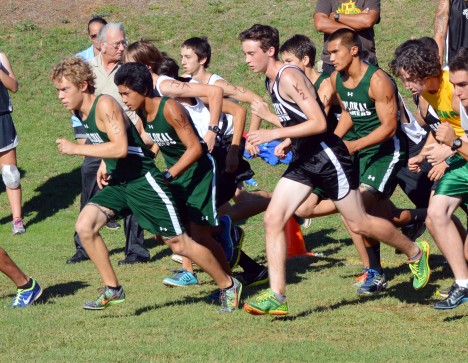 Photo by Leah Johnston, courtesy of The Maui News.

“This could’ve been their final race, so everybody ran hard and gave it their all,” said Adolpho, who traveled with the teams to Maui’s Keopuolani Pit for the three-mile race. “I’m really proud of them and how they finished.”

Kori-Lee DeRouin and Kamahina Kaiama-Kanuha represented Molokai’s girls in the MIL Championships, running individually, since schools need at least five runners to compete as a team. Kaiama-Kanuha finished 46th with a time of 37 minutes and 15.47 seconds. DeRouin came in at 47th place with a time of 37:15.72.

“This is actually the first time that I can remember that Molokai’s gonna have a scoring team,” said Adolpho. “It takes five runners to have scoring team. [Our goal] is to try and place as a team at the D-II level of states.”

These days, when Molokai runners set a goal, they meet it.

Although regular cross country coach Mahina Hou Ross will return next season, Adolpho said he may come back to help next year and “keep the momentum going.”