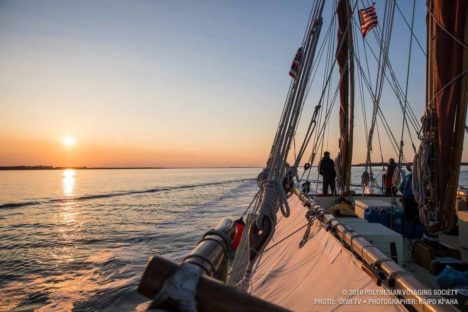 Molokai’s Kawika Crivello is once again joining the Hokule`a’s Worldwide Voyage as a crew member. This time, he traveled to Virginia two weeks ago to sail south along the East Coast to Florida in one of Hokule`a’s final legs before heading home to Hawaii.

As the weather gets colder, he shared a photo of the vessel’s hull covered in frost. The crew has been bundled up in winter clothes. As they headed south to North and South Carolina, Crivello commented on the beauty of the scenery.

“We’ve run across bald eagles, trees that are changing of colors, it’s fall season,” he said in a social media video.

Georgia and Florida are still ahead for him and the crew as they sail 950 nautical miles on their journey from Virginia to Miami, Florida, where they are expected to reach in early December. The canoe will make approximately 16 stops in various ports along the way. In Miami, Crivello said fellow Molokai crew member Lohioa Paoa will meet with him and continue the voyage on the Panama leg as Crivello heads home.

In the wake of an embittered Presidential election with racial tensions rising in many areas, Crivello shared a powerful Facebook post last week that has received more than 600 “likes” and nearly 150 “shares” as of Sunday. We’ve reprinted it here, with permission.

“As I sit here in South Carolina, I am greeted by a large African American bradda. his first statement to me is, ‘You ain’t from here huh?’ followed by, ‘Where are you from?!’ With a handshake and a answer to his question, Hawaii, his eyes light up. He shouts his excitement to all nearby. ‘Hey! This dude’s from Hawayah!’

“Long story short after answering his next question, ‘Why are you here?’ I share with him about Hokule`a, about where I’m from. His questions are [filled] with curiosity, he wants to know more about my home, our peoples success, our struggles. His eyes are intense as he is moved by the stories of my home Hawaii. The conversation changed as I asked him of this place, of its history, of his ohana. He shares with me that of the things he’s seen as a young child growing up in the sixties. That of burning crosses, KKK, the racism of the south and stories of his grandmother and slavery. He shares as if he’s reliving it.

“I’m listening to first hand accounts. I am sitting in places that I only read about, or seen [in] movies that speak of [these] exact places. Of hangings of lynchings. Deep. I look around as I listen to his mo`olelo. His eyes welts with tears. Kaumaha. Yet he ends with this to take back home. He asked me, ‘Promise me you will share this with whoever will listen.’ We are in a time in this world where Love is needed, my skin color should not define me as who I am nor should yours or any person. Overpower hate with love!! Overpower hate with love! I agree, Calvin, thank you for sharing your history and stories of your place and family. You have my word. Your message will be shared. Blessed to have met you.”

From Florida, Hokule`a will travel through Panama to continuing the 11,000 miles home to Hawaii, by way of the Mexican coastline and up the U.S. and Canadian west coast before crossing the Pacific.

The Malama Honua Worldwide Voyage is slated for completion this June, and will have covered more than 60,000 nautical miles, 125 ports and 27 nations.

Photos: Kawika Crivello (foreground) and Zane Havens steer us out of Coinjock.