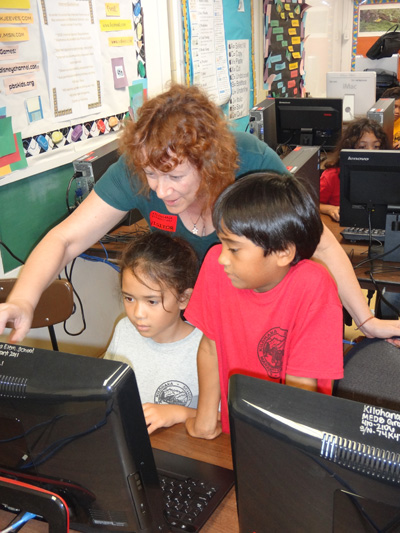 When it comes to computer programming, JAVA and HTML are terms that seldom spark much excitement, especially in younger learners. However, Teaching Kids Programming (TKP), a program that was started four years ago in California, has designed courseware and curricula for schools around the world that makes learning with computers not only educational “but also joyful,” according to TKP co-founder Llewellyn Falco. Last week, he and two other TKP trainers volunteered their time to visit Molokai for 10 days and got young students at Kilohana School and Molokai Middle School (MMS) engaged in these programs. By the end of one session at Kilohana last Thursday, students were jumping out of their chairs to apply what they had learned on their own computers.

“If you use computers –and most kids do use computers –and you don’t know how to create them, then you become just a consumer and that is a very limiting place to be,” said Falco, who has been a professional programmer for over 20 years. “What we want to do is not just create consumers but create creators.”

At Kilohana, Falco and fellow TKP co-founder Lynn Langit worked with students from kindergarten to third grade to code ,or create computer functions, using a program called Microsoft Kodu in which kids as young as 5 may design their own “worlds,” adding in trees and oceans as they see fit.

At MMS, the curriculum is slightly more advanced, as seventh and eighth grade students learn to work with JAVA, a core component of technology today that powers state-of-the-art programs including utilities, games and business applications, according to java.com. It runs on personal computers, mobile and television devices.

“We’ve designed curriculum and practices to be interactive and engaging and tried to make it ‘anti-boring,” said Langit, who was first inspired to create TKP courseware as a developer promoter working for Microsoft. “We hope that some kids who go through this will get engaged and decide they want to try programming as a career.”

With the advancement of new telecommunication technologies like Skype, aspiring programmers will increasingly be able to stay and work from the island of Molokai, Langit added.

“You can see the kids have been totally engaged, all the way from kindergarten to eighth grade,” said Gaellen Quinn, executive director of the Mona Foundation. The foundation, who funded the TKP program on Molokai, is a non-profit organization that supports universal education for children around the world.

TKP worked in partnership with the Mona Foundation as well as Maile Naehu, a literacy teacher for Kamehameha Schools at Kilohana, who coordinated many of the on-site visits at both Kilohana and MMS. She also organized a teacher-training session last Saturday so that educators can learn how to continue to use TKP courseware, which is available online free of charge, in their curriculum year-round.

“Because we [at Kilohana] are such a remote and small school, our budget is really small,” said Naehu. “It is up to the homeroom teachers to create the curriculum, but often times we don’t have the tools to train the teachers, so when I found out about this I thought it was an excellent opportunity for our teachers to grow professionally.” 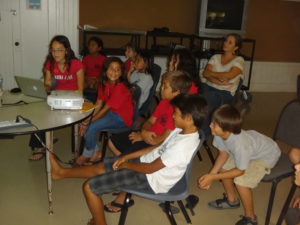 Samantha Langit, 13, is one of the TKP trainers that helps guide students through how to use the courseware.

TKP courseware is used in 15 states across the U.S. as well as 10 foreign countries, according to Langit. She and Falco have taught all around the world, including in countries like the United Kingdom, Denmark, France, Zambia, Australia and Korea.

Langit’s 13-year-old daughter, Samantha, is one of the TKP trainers who travels to schools and assists young students with the courseware. She started learning computer code when she was just 8 years old, and said it has helped her math skills. She said the most rewarding part of what she does is that moment when the kids learn how to do something new and “everyone is just like ‘wow.’”