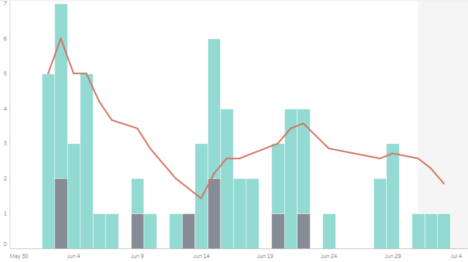 Last week Molokai had eight new COVID cases officially reported between June 29 and July 6. The previous week, between June 22 and June 29, there were 10 positive cases, according to the Dept. of Health. There have been 1,150 cases on Molokai reported since the beginning of the pandemic.

Because of home COVID tests which are not reported to the DOH, officials recommend multiplying the reported number of cases by as many as six or seven for a more accurate count of actual cases.

Statewide last week, there were 4,381 cases reported, with a daily average of 651. Overall, the state has seen a slow but steady decline from a recent peak at the end of May, when the seven-day statewide average of daily cases reached 1,255.