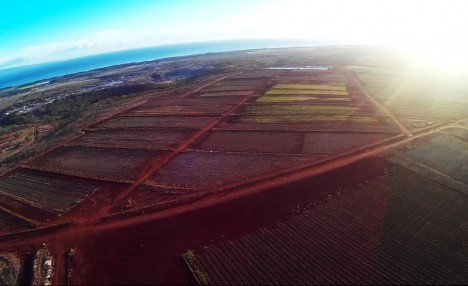 A highly disputed voter initiative to ban the growing of genetically engineered crops passed in Maui County in last Tuesday’s General Election by a narrow margin of 50 percent to 48 percent, with just over 800 votes’ difference.

On Molokai, all of the island’s four precincts voted no by a ratio of nearly two to one, with 63 percent voting against the moratorium and 34 percent favoring it island-wide, according to stats from Hawaii’s elections website.

The initiative calls for a moratorium until a detailed environmental impact study of the harms associated with growing genetically engineered organisms has been completed and reviewed by the County Council.

In the wake of the vote, Monsanto and Dow Agrosciences, known on Molokai as Mycogen, are poised to legally challenge the initiative, while County of Maui administration says it is preparing to enforce the moratorium. 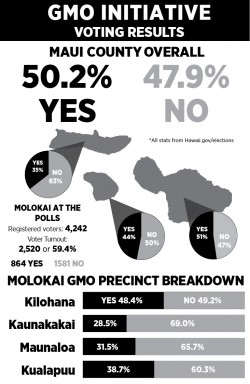 The Citizens Against the Maui County Farming Ban spent nearly $8 million on their campaign to defeat the initiative, according to data from the Hawaii Campaign Spending Commission. Monsanto spent $5.1 million toward that total, and Dow AgroSciences, which operates on Molokai as Mycogen, contributed nearly $1.8 million. Political analysts have said more money was spent on the campaign to oppose the initiative than this year’s gubernatorial campaigns combined.

Ashley Lukens, director of the Hawaii Center for Food Safety, said the vote yes campaign had raised less than $100,000 – meaning they were outspent by more than 80 to 1. Some have called it a David and Goliath story.

But on Molokai, the decision comes as a blow to many families employed by Monsanto and Mycogen, and residents are left in limbo as to what the decision will actually mean. About 250 of the island’s jobs are provided by Monsanto and Mycogen, and even those who support the moratorium have said they don’t want to see friends and family lose their livelihood.

Legal action is on the horizon. Monsanto said in a statement last week the company plans to “ask the court to declare that this initiative is legally flawed and cannot be enforced.”

“We believe this referendum is invalid and contrary to long established state and federal laws that support both the safety and lawful testing and planting of GMO plants,” said John P. Purcell, Ph.D., vice president, business and technology lead, Monsanto Hawaii. “If effective, the referendum will have significant negative consequences for the local economy, Hawaii agriculture and our business on the island. … Monsanto remains firm in our commitment to ongoing dialogue with our neighbors, and we will continue to listen to and talk with the members of our community.”

“Monsanto and other allied parties will be filing suit to challenge the legality of the ordinance,” she said Friday, adding at that time, it is not yet known when the suit will be filed.

Bicoy said in the meantime, operations on Molokai will continue.

“We are heavily focused on helping our employees cope during this very difficult time and offered them the opportunity to go home [last] Wednesday for the sake of their personal well-being and to be with their families,” she said, via email. “As a team we resumed operations Thursday, and will continue to operate as we work through the justice system to overturn this flawed initiative.”

She called the initiative “emotionally hard and exhausting for all of our employees.”

Bicoy would not comment on possible scenarios for the company if legal action does not halt the moratorium, but called the possibility “devastating.”

“Unfortunately, if this ban withstands legal challenge and is enforced, our operations will be significantly impacted … particularly here on Molokai,” she said.

Lukens said she feels for Molokai employees but stands by the initiative.

“I see the tension and divisiveness that this has caused,” she said. “My heart goes out to those who have been negatively, either those who fear for their job or those who fear from their health. You can get a new job, but the quality of life for a child who suffers from asthma never goes away. … We can never take back our unique biodiversity once it’s destroyed.”

Amid a possible lawsuit, the County of Maui is moving forward with its duty to carry out the initiative. The state Elections Officer has 20 days after the election to certify the results, said County Clerk Danny Mateo. After that, the initiative will become law, and the administration is preparing to enforce it, according to County Communications Director Rod Antone.

“We’ve been meeting for months now internally in regards to how to implement the moratorium if it should pass,” said Antone. “We met with police prosecutors, personnel services. … We will probably have to hire people we’ve never hired before, like plant geneticists.”

He said part of enforcement is determining whether the plants in question are actually genetically engineered or not. Antone said it’s not yet been determined if the county would hire a contractor to complete the study, or bring on staff to complete the study as county employees.

The next step is to finalize a list of all the resources needed to carry out the ordinance, he said. After that, the administration has to submit a budget amendment to the County Council for their approval. Antone said there’s no estimate yet of what that budget would be.

“We’ve gotten a lot of calls,” said Antone. People are saying, ‘Why haven’t we shut down Monsanto yet?’ It’s not that simple.”

Antone said as soon as the ordinance becomes law, and if it’s not challenged in court, the county will begin enforcement. If it’s pending legal action, however, he said the county “would have to wait for that to play out.”

Even though Mayor Alan Arakawa and most members of the County Council had stated their opposition to the initiative before the election, Antone said none of that matters now.

“As an administration, once the law is passed, we have to enforce it,” he said. “Personal feelings have nothing to do with enforcing the law at this point.”

And while many who opposed and supported the alike have called the initiative poorly written, County Director of Council Services David Raatz said there won’t be much opportunity for rewriting it in the new future.

He said while this is the first voter initiative of its kind in the county – most ordinances arise from council action – the county charter states that the council isn’t permitted to rewrite or amend any ordinance that’s passed for one year. After that, the council would be free to take a look at making its own possible amendments.

“It’s a little confusing for all of us because it’s so new,” he said of the process the initiative is becoming law.

In the meantime, “action pursuant or in response to initiative would be possible” for the council, said Raatz. And in some cases, the court could mandate portions of the initiative to be rewritten, he added.

It’s unclear at this time who is responsible for paying for the study and enforcement required by the initiative. Lukens said it will be paid for by the seed companies, not taxpayer dollars.

She points to Section 7 of the initiative that states: “Person or entities affected by and seeking release from the Temporary Moratorium in Maui County must provide Maui County the funding necessary to complete an Environmental and Public Health Impacts Study.”

The initiative also states that study must be “independent of GE industry ties,” but Lukens said the required “approval process by community” would ensure the study would remain unbiased even if seed company funding was used.

“These are some of the details that the county is going to have to work out,” she said. “That’s the reason we have a government. … I can’t as an individual, regulate a company that operates alongside my home. I can think of no better use of your taxpayer than the protection of our public health and environment.”

Antone said if the companies are footing the bill, he doesn’t know about it.

“As far as we know, this will all be county funds,” he said. “We’ve not been made aware of any money given to us to enforce the law. … I’m not aware of any fund that is being put together by the seed companies.”

Despite the challenges, Lukens said the election outcome sends a strong message to the seed industry in Hawaii.

“Community members will not sit idly by and watch these companies threaten the health and safety of our people and our planet,” she said in a statement last week. “Voters saw past the misleading claims of pesticide companies like Monsanto and Dow Chemical and demanded accountability to the community.”

While many unknowns remain, one thing is for sure: The process will not be straightforward, likely involving lengthy court proceedings, before an outcome is clear.

In the meantime, a group of Molokai residents sought to heal the deep rifts that the issue has caused among families and friends. On the afternoon of elections, some community members and island church leaders gathered in a circle by the side of the road where both campaigns had held signs in the previous weeks. They sought to put aside differences and pray for the island as a whole, to unify and find common ground moving forward.

“It’s always hard when we have strong issues like this, when it’s with land, and our jobs and economy and our people.” said resident Kilia Purdy-Avelino, who organized the Unity Prayer gathering. “… We might be strong when we fight for our causes, but we’re also strong when it comes to spirituality too and the prayer. … We just wanted to see our community unified again.”