Wednesday, May 25th, 2022 By The Molokai Dispatch Staff 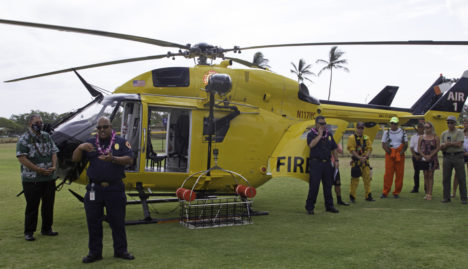 On May 20, Molokai’s Hanale Lindo, Maui Fire Department Assistant Chief of Operations, conducted the blessing of a new rescue and firefighting Air 1 helicopter on Maui that will also serve Molokai during emergencies.

The Eurocopter BK117-850G2 aircraft, named “Iolani” (royal hawk in Hawaiian), will begin service on July 1. The pilots and air crews have already begun training on the aircraft. The twin engine helicopter will bring more safety elements for both responders and the public, said Fire Chief Bradford Ventura. The aircraft has increased hoist capability to lift victims and rescuers from the ground into the aircraft, as well as increased personnel carrying capacity, according to a Maui Fire Dept. press release.

Windward Aviation will operate and service the aircraft under contract with Maui County. Don Shearer, head of Windward, said Maui County will be the first county entity in Hawaii to have the capabilities this new aircraft will provide, both for rescue operations and firefighting.