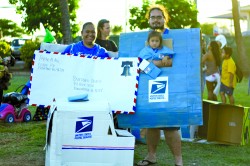 The Aki family won second place in the most original family category for their postal service inspired theme. Photo by Jessica Ahles

Zombies, clowns, giant sweets and superheroes of all ages put on a show and strutted their stuff Thursday at this year’s Lions Club Halloween Costume Contest.

Over 140 costumed contestants presented their scariest, cutest and most original Halloween-wear to Lions Club members on the Kaunakakai Public Library’s front lawn with cash prizes of $10 for first place, $5 for second and an ICEE coupon for third.

“This year, more kids are making their own costumes and it’s fun seeing how creative they can get,” said Lion Linda Mina.

This year’s results are still a little fuzzy as Lion member judges viewed a monster mash of costumes, however the recorded winners are as follows:

For the baby to preschool category, Liliu McGuire won cutest costume as a lamb; Kileona Kanawaliwali won scariest as a witch; and Lehue Rawlins-Elalins won most original as an aloha float.

For Kindergarten to third grade, Kailann McGuire-Grerrer won cutest; Kailani Bicoy was named scariest; and most original was Arianna Hanpoka.

Grade for through six winners were cutest, Haley Alfante, as a clown; scariest, Tyler Cueulo, as a zombie; and most original, Kamalani Puaa-Kanawaliwali, as a hula lamp.

The cutest winner for the grade seven through adult category was Cerdall Manley; scariest was Larissa Gorospe; and most original was Landon Pawn-Kalilkane.

Families and groups also sported theme costumes including a group of geishas who won the cutest category; the Kalanihuia family who won scariest with their Star Wars theme; and the Ritte-Camara family mermaids who won most original.

“I just love seeing the kids get involved,” said third place scariest adult winner, Mad Hatter Sherry Tancayo. “I like how Halloween brings the family together.”

The contest also passed out candy to contestants, sending families off to a full night of Halloween fun and trick-or-treating.