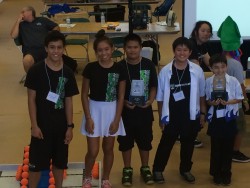 On Sept. 25, Molokai traveled to Baldwin High School for the 2015 aio Maui County Fair VEX IQ Tournament. Team Kalo Farmers led the field throughout almost the whole qualifications round with consistently high scores in the 80s and 90s. Heading into the finals round, the Kalo Farmers were ranked second with 484 points right behind brother school IPA in first with 505 points. They would combine in the final championship match number seven for the finale. The Menehune Farmers were ranked seventh with 310 points and would partner with Lahaina Intermediate Robotics number four in eighth place with 295 points for finals match number four in the finale.

In the end for Molokai, Team Menehune Farmers came out in third place alongside their partner Lahaina with 72 points, while Team Kalo Farmers took top honors of Tournament Teamwork Champion alongside their partner IPA with a tournament high score of 109 points. In addition, the Kalo Farmers also came away with a second top Tournament honor of Middle School Excellence Award. Both Teamwork Champion and Middle School Excellence Awards are state-qualifying trophies, thereby double-qualifying Team Kalo Farmers for the State Tournament in February 2016.

Next for 434 is the Maui County VEX IQ Tournament on Dec. 19 at Baldwin High.