An investigation of the underground contaminants of the former power plant in Kaunakakai has received the green light to begin in a few months. Last November, Maui Electric Company told the community about its planned clean up of the former Molokai Electric Company site. Now, Maui Electric, which inherited the company but not the site, was approved for two Special Management Area permits by the Molokai Planning Commission last week, allowing the project to move forward. 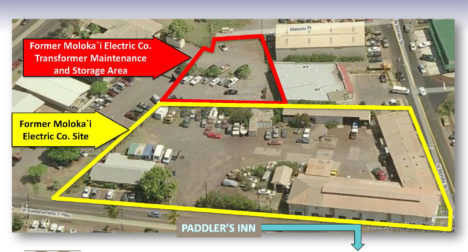 The Molokai Planning Commission voted unanimously to approve the permits needed for subsurface soil testing to be completed. One permit will cover work within the primary test area — a 1.5-acre parcel bordering Kamehameha V highway across from Paddlers Inn between Moahala St. and Ala Malama Ave — and the second permit would cover surrounding parcels in case expanded testing is needed. The primary test area includes a parking lot and commercial warehouse — occupied by Molokai Supply — owned by Misaki’s Inc., and a parking lot behind Bank of Hawaii, owned by Gary Galiher Trust.

Initial tests have shown several toxic contaminants may be present at the site, such as PCBs, which stands for polychlorinated biphenyl, petroleum and heavy metals. Maui Electric is working with the Environmental Protection Agency (EPA) and Hawaii Department of Health (DOH) to meet both state and federal standards for remediation of these substances.

The site was formerly the generating station for the Molokai Electric Company, which began operation in 1932. In 1985, Molokai Electric relocated operations to the current power plant site at Pala`au, and in 1989, Maui Electric purchased the company and began providing electric service on the island.
In 1994, the Molokai Planning Commission requested a site investigation from the DOH for the parcel where Paddlers Inn currently stands, according to Maui Electric officials. The results showed no contamination above action levels.

In 2000, the EPA conducted a site study, though no further action was taken by the agency until 2010. In 2008, after community interest was expressed in other uses or possible redevelopment of the site, Hawaiian Electric Companies met with the DOH and two years later, the EPA completed another assessment. In 2012, with confirmation of contamination, Maui Electric, the EPA and DOH worked to determine site investigation methods and a work plan. In late 2015, Maui Electric hired Element Environmental to complete the work and prepared the SMA permit applications for the county.

Many residents have questioned why a cleanup effort has not begun sooner, and Greggory Kresge, Maui Electric environmental compliance engineer, said it’s because the current use of the property has been determined to be safe.

“I think the reason why it’s taken so long and why there hasn’t been a lot of action is because what is there right now has been deemed acceptable by DOH and EPA,” he said at last Wednesday’s Molokai Planning Commission meeting. “…If there was nothing done to the site other than what’s its currently used for… a common strategy to contain PCBs, because they bind with the soil, is to cap them with asphalt, and leave them in place…”

Matthew Neal, senior environmental scientist with Element Environmental, said PCBs are a toxic compound that were used frequently up until the 70s to insulate electric components. He said they don’t degrade easily, but they also don’t move in water so even when it rains, they will remain in place within the soil. He explained that currently, there’s no concern with PCB exposure at the site, but if there was to be any excavation in the future, there would be potential danger from exposure.

With the SMA permits now approved, Kresge said they plan to begin testing in May or June of this year. A crew of three to eight people will use a small drilling rig to take many soil core samples at various depths, explained Neal. He said soil will be collected from one foot below the surface down to groundwater level at a depth of five feet. In addition to the soil samples, the crew will drill a series of wells to test the groundwater and soil vapor — or gas — beneath the surface.

Starting at the center of the site and working their way outward, the crew will be able to determine the source and extent of any contamination.

“After the testing, the holes will be filled so there’s no exposure risk,” said Kresge. “These two-inch holes will all be back-filled with concrete.”

The soil samples will be sent to the mainland for lab testing. Any soil removed from the site will remain in a secured location until its toxicity is determined, said Kresge. After that, if contaminated, it will be sent off-island for safe disposal.

Neal said dust from the area is not a safety risk, as contaminants are located well under the surface.

He said despite any inconvenience, he thinks the project is important.

“I do want it to happen, it needs to be cleaned up, but just the process is going to be a little hard for all of us,”he said. “This process has to be done…. So we have to look forward to what’s going to happen in our future.”

Testifier Charles Miguel, a retired engineer who said he’s done work in the area, described the project as “a can of worms,” referencing extensive contamination.

He said the former power plant used to have fuel lines running on either side of the block, and Molokai Electric would wait for them to rot or corrode before replacing them, causing extensive fuel leakage.

“This thing has been going on for years,” he said. “This thing is not easy, it’s a bucket of worms.”

He said he also witnessed contamination as far away as Pizza Cafe while digging holes for projects in the area.

“If we find contamination, we follow the contamination until we get to the end,” said Kresge. “So if that goes beyond the lots we identified, we will be back before this commission seeking additional SMA approval. We’re just going for the area we are suspecting are [most contaminated], but that doesn’t mean that’s the end.”

Kresge said after the investigation, Element Environmental will compile a report based on the findings to submit to the EPA and DOH, as well as the community. In 2018, they anticipate beginning a discussion about what the cleanup might involve. Without the finds of the study, Kresge said it’s hard to speculate on what action may be required. After more discussions with the community and the landowners, site cleanup would take place in 2019.

“This is a huge project and you guys are doing the right thing,” said Planning Commissioner Rob Stephenson. “This work… illustrates your commitment to the community.”

Kresge said community meetings will continue to be held throughout the process so residents can stay involved and informed.