A new county Department of Public Works baseyard will bring upgrades for both the department and Molokai’s emergency response capabilities. The current facility is located on state property next to Rawlin’s Chevron in Kaunakakai– which is also a flood zone, according to David Goode, Maui County director of Public Works. That means in the event of an emergency such as a tsunami, employees may not be able to access equipment.

“We needed to move out of the flood zone — we’re typically the first responders,” said Goode. 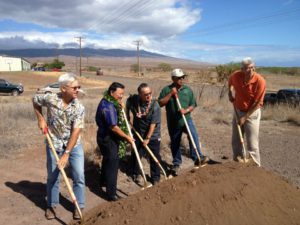 The new baseyard building, which costs nearly $4 million, will stand in the Industrial Park near The Nature Conservancy office. The county purchased three lots for the facility totallinh about 2.5 acres. It will include offices, a vehicle storage shed and a civil defense command center for enhanced emergency response capabilities, according to Goode. Phase two of construction, to be completed in the future, will include a maintenance garage.

That’s one of the reasons it was important for its headquarters to be moved from the flood zone in town. Another reason was the current baseyard’s outdated construction. One section of the building was built in the 1960s, while another wing was constructed back in the 30s, said Goode.

“I think it’s really important to let the other islands [in the county] know that Maui is thinking of them,” he said of Molokai and Lanai. “Based on requests from [the Department of Public Works], we’re doing our best to consider the capitol improvements they need… It’s something they’ve been wanting for a while.”

The wait for the new baseyard has indeed been a long one. The department began looking for a new site 15 years ago, explained Goode. Funds were allocated by the county for the purchase of the property about five years ago, and an environmental assessment for construction was completed last year.

Now, with funds designated for building and a groundbreaking ceremony completed last week, a completion date is scheduled for December of next year, said Goode.

“We look forward to getting it completed — it will last a long time, and we should be able to provide better service, especially in times of emergency,” he said.