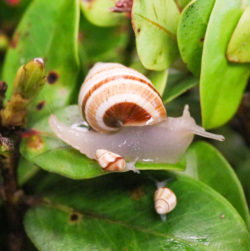 Five parcels in the Mākolelau ahupua’a of Molokai, totaling 1,045 acres, have been purchased for land conservation and restoration. The acquisition was made by DLNR Division of Forestry and Wildlife (DOFAW), in partnership with the U.S. Fish and Wildlife Service (USFWS) and The Nature Conservancy (TNC), using funding from a $1.8 million grant from USFWS and more than $600,000 in private donations to TNC.

The area represents part of Molokai’s Sole Source Aquifer, designated by the State Commission on Water Resource Management (CWRM) as a Priority 1 Watershed, according to a DLNR press release. The ahupua‘a’s higher elevations contain intact native forests, the protection of which contributes to generation of fresh water supplies and reduction of erosion that damages the South shore coral reefs.

“Mākolelau contains some of the best remaining dry to mesic forest and shrubland on Molokai,” said Molokai’s Russell Kallstrom of TNC Molokai. “Its protection is a victory for the conservation community and for Molokai.”

The Mākolelau ahupua‘a parcels will now link to other conservation lands from east to west and from the summit of Molokai to the sea, providing continuous corridors for endangered forest and sea birds, ‘ōpe‘ape‘a, more 50 native plant species — 38 of which are endangered — and ‘o‘opu and invertebrates following streams from sea level to head waters, according to DLNR. The parcels are also part of the East Molokai Watershed Partnership, in which contiguous private landowners are working on conservation projects.

“From a local perspective in conservation, this acquisition brings forth assurance that existing conservation efforts may continue unhindered by access or liability issues,” said James Espaniola, a Molokai community member involved in conservation. “It will hopefully allow for more management of natural resources as well as subsistence resources in the area.  This will allow for an ahupua’a type of management since these lands stretch from mauka to makai, while eventually allowing everyone to enjoy the unique landscapes among this area.”

One of the biggest impacts of mauka management will be on the ocean. The fisheries supported by Molokai reefs are an important food source for island residents, according to DLNR. Summit to sea planning and management will help protect the state’s longest fringing reef from siltation and storm run-off due to heavy rain events, supporting habitat and marine life. Through conservation management efforts, DOFAW estimates up to four metric tons of soil will be stopped from entering the ocean and washing down current each year.