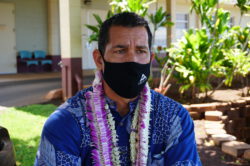 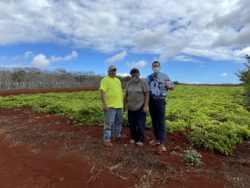 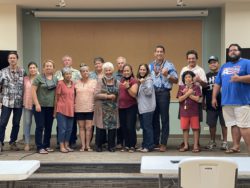 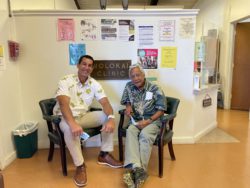 Congressman Kaiali’i Kahele spent four days Molokai last week to get a better understand of the challenges and strengths of the community, as the last stop in a district-wide tour. He spoke with sustainability leaders and fishpond restorers, large-scale farmers and backyard gardeners, as well as staff at a variety healthcare organizations on island.
U.S. Rep. Kahele took office on Jan. 3 of this year, representing the second Congressional district, which covers the whole state.

“My first six to nine months in office [I wanted to] get a chance to go to all the different islands to really start to hear what are the community’s concerns and how can my voice at the federal level help answer some of those things,” he said during his Molokai visit, which spanned Monday to Thursday last week.

He heard about Molokai’s subsistence lifestyle, soil erosion and watershed research, service access challenges of Molokai veterans, and the obstacles being faced by local farmers.

“Clearly, money for fences is number one on my priority list, money for small farm equipment is really important, water infrastructure is vital as well, but the deer are totally destructive, I saw with my own eyes,” he said of his visits with farmers.

After talking with staff at Molokai Community Health Center, Molokai General Hospital, Na Pu’uwai and private practice doctors, he said the need for cooperation for health services is key.

“We need more synergy — those organizations working together more, not duplicating efforts so everyone is doing what they do best and what the island needs the most,” he said.

On the 100th anniversary of the Hawaiian Homes Commissions Act, which established the first homesteading community on Molokai in 1921 and later around the state, Kahele introduced legislation at the federal level to change the blood quantum requirements to inherit Hawaiian Homestead land. In 2017, Act 80 passed in Hawaii that would reduce the successorship qualification of a lessee’s spouse, children, grandchildren and brothers or sisters from one quarter to one thirty-second Hawaiian. The change in blood quantum requirements would allow homesteads that have been in families for generations to remain in lawful successorship even though future generations may not have one quarter Hawaiian blood. The change needs to be passed at the federal level to become law. Kahele said he’s hoping to get the bill approved by the House of Representatives and into the Senate by the end of the year, and allow another year for it to be passed in the Senate.

For the island of Molokai, Kahele said the community needs to come together to decide its future.
“Part of the challenges for Molokai that will need to be determined in the future is what is the fate of Molokai Ranch, what are the economic drivers of this island and what does the community want in terms of what that future looks like?” he said. “I’m always one that wants to hear what the community wants, I think that’s better than myself… to tell Molokai what is in their best interest.”

On Molokai, Kahele is represented by resident Gene Ross Davis; having a Molokai-specific representative is something that hasn’t been done before by a Congressional delegate, he said.

Kahele, from the small fishing village of Miloli’i on Hawaii Island, is a combat veteran, pilot and continues to serve as a commissioned officer in the Hawaii Air National Guard, U.S. Air Force.