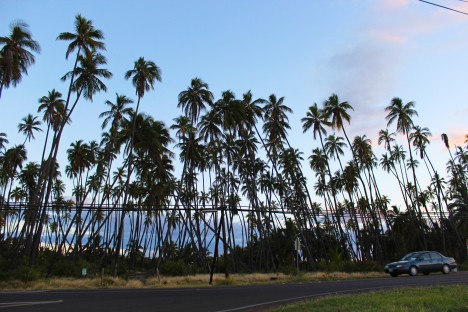 Molokai’s historic Kapuaiwa Coconut Grove has stood for more than a century. However, recently residents have begun to notice the deteriorating health of the coconut trees. Scattered among the healthy palms are a number of dead trees, their tall trunks ending abruptly in leafless stubs. Not only are the lifeless trees an eyesore, but the cause of their death is an increasing concern within the community.

Last December, the Molokai/Maui Invasive Species Committee (MoMISC) gathered fruit and leaf samples from the grove for testing, according to Lori Buchanan, field outreach coordinator for MoMISC. The Department of Agriculture (DOA) and UH College of Tropical Agriculture tested the samples and identified multiple pests and diseases.

“Besides the coconut mite, there are other pests adding to the overall decline of the trees,” Buchanan said via email. “… The following was also detected: coconut scale, a weevil, white flies and other hard scales. Also suspected is some type of fungus.”

On May 21, Kalama`ula Homestead Association members met at Kulana `Oiwi to discuss the grove’s condition. They said the grove is being overtaken with unwanted growth, and the trail of rubbish left by careless residents and visitors is also taking its toll. Community members felt that both their concerns and the grove’s maintenance are being ignored by the Department of Hawaiian Home Lands (DHHL), which owns the property. Although DHHL Molokai Acting District Supervisor Halealoha Ayau was unable to attend the meeting, residents got started addressing the issues plaguing the grove.

Having learned the impact that coconut mites can have on trees, Association President Gayla Haliniak-Lloyd gave residents at the meeting a snapshot of the effects of the pest. The mites eat away at young coconuts, she explained, making the leaves turn yellow and start falling away. 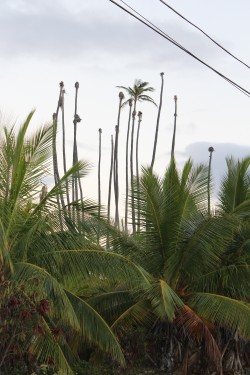 Darcy Oishi, entomologist at the DOA, said in a phone interview that while the mite does create an environment that fosters the growth of other harmful species, “it won’t necessarily kill the tree.” What is more concerning, however, is phytophthora, a fungal disease that creates rot within the trees and will eventually kill them. The length of time it takes for the fungus to kill a tree depends on multiple factors, including the water and nutrients the tree is receiving as well as the presence of pests, according to Oishi.

No single factor is to blame, as Oishi explained that the problems are “acting in synergy” with each other to cause the deaths of the trees. Along with disease and pests, the situation is exacerbated by the grove’s density. With the trees packed so closely together, it’s an ideal place for diseases to spread and also makes removal difficult.

“Speaking from strictly what is good for the plant, it would be great to see the dead trees removed,” said Oishi. “But … if you chop down an 80-foot tree, how do you safely do it without it hitting another tree and potentially knocking it down? These are the tough management decisions we’re faced with. … The overriding issue is that all of this has to be done in a culturally sensitive manner.”

The grove, which was planted in the mid-1800s for King Kamehameha IV, according to historian Arleone Dibben-Young in a previous Dispatch story, is considered by many to be sacred land. Dibben-Young said the trees have been replanted at least  three times on five to seven acres. The property, which stretches across nearly 10 acres, still includes palms that are more than 100 years old. Oishi said some of the older trees have roots exposed, making them more susceptible to disease.

At this point, neither he nor Buchanan knows how much of the grove is infected. Oishi admitted there are “more questions than answers” right now.

While the DOA doesn’t have staff on Molokai, Oishi said he does “intend to see staff going to Molokai more often” to monitor the grove.

Meanwhile, community members said, they need to take care of the human elements damaging the grove.

“When people come to look at the grove, they must think, ‘Wow, we must not clean ‘em,’” said resident Lorena Atchison. “It’s embarrassing.”

Atchison said some boat owners leave dead fish carcasses and bait along the shore, while families dump used baby diapers in the area. People drive and walk in without concern for the danger of falling coconuts or the soggy ground hollowed out by underground springs.

“It’s one coconut away from killing somebody,” said homesteader Zachary Helm. “That’s all it takes.”

The ground is also thick with haole koa bushes and fallen leaves. Since the DHHL only has one maintenance worker to take care of multiple plots of land across the island, residents said they’ve offered to sign liability forms and help out in the grove but have been turned down without explanation.

“I don’t think there’s anybody on this island that doesn’t agree that Coconut Grove is not being maintained, even visitors,” said homesteader George Aiwohi. “… There’s no excuse for that, because people are willing to help.”

Ayau, answering concerns in an interview after the meeting, said he would be open to residents lending assistance as long as they sign limited right of entry permits.

Homesteaders added they want to see the protective fencing and signs that have been sitting in the DHHL office for two years finally placed at the grove. Ayau explained that he understands the urgency but feels the DHHL needs to take time to educate the community first. Otherwise, people will simply pull the signs down as they’ve done in the past. 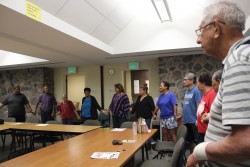 Homesteaders join hands for a pule after the meeting. Photo by Colleen Uechi.

“On this island, if you don’t consult with the community, there will be pushback,” he said. “The majority of folks who came [to the meeting] agree with what we do. … I’m concerned with people who completely disagree. They’re the ones who are gonna rip the signs down. They’re the ones who are gonna cut the fence. We don’t have the resources to keep putting these things in. We have to do it with as much community buy-in as possible.”

Ayau said establishing community understanding will require meetings and spreading the word about the grove’s need for protection. He said he plans to be at the association’s next meeting.

In the meantime, concerned homesteaders at the May 21 meeting drew up a list of ways to help maintain the grove. Some suggested that people can do their part by picking up trash along the perimeter, down Kapuaiwa Road and along the beach. Others suggested collaboration between homestead associations as well as with state environmental agencies that hold the manpower and equipment.

Ayau, who was hired for the position in 2011 on a temporary basis, said his position still gives him enough authority to make decisions concerning the grove. He said the DHHL needs to develop a long-term plan for the grove that includes determining whether the diseased trees need to be removed, and if so, how to do so in a respectful way.

In the end, community members, scientists and the DHHL all face a similar crisis.

“For over a century [the trees] stood guard for Kalama`ula,” said Ayau. “The real question to me is … these trees were planted over a century ago. What do we in 2015 decide the next century is gonna be like for the site?”

The Kalama`ula Homestead Association plans to discuss the grove at another community meeting on June 9, at 5 p.m. at Kulana `Oiwi.