County planners and Molokai residents are gearing up to form a blueprint for the island through 2035. After many delays, the Community Plan update process is underway, poised to kick off in full force in the New Year.

The first Molokai Community Plan was adopted in 1984 and was updated last in 2001. The community plan guides much of the large-scale decision-making for the next 20 years. It includes complete descriptions of existing conditions on the island as well as goals, policies and actions, including land use designations, details on future development, projected effects of that development and infrastructure improvements. The plan also outlines implementation actions for those goals. 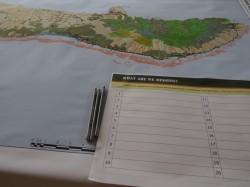 Updating the plan has been a long haul; in 2010, planners held community engagement events to begin the updating process, which at that time, was projected to be completed by 2012. But long range planner David Yamashita said Lanai’s community plan update took precedence in Maui County, because of the island’s new ownership and rapidly developing changes, which delayed Molokai’s process. But with Lanai completed, the county is turning its attention back to Molokai and are prepared to move forward to see the plan to completion.

“It’s supposed to be updated every 10 years. … We’re a little behind,” said Jennifer Maydan, a planner with the long range planning division and project lead for Molokai’s update. She, Yamashita and other county staff held an open house event on Molokai Nov. 15 to present information about the process to the community and share what’s coming.

The anticipated update will cover 2015 to 2035, according to Mayden.

Maydan said a Community Plan Advisory Committee (CPAC) of 13 Molokai residents will form a decision-making body for the community plan. The CPAC will review, comment and recommend revisions to the draft plan. Nine CPAC members have been appointed by the County Council, while four will be picked by the mayor.

Starting in early 2015, the CPAC will meet at least twice a month in the evening and be open to the community, with opportunities for public testimony during each meeting.

Maydan said one of the main roles of the community plan is to identify land use designations, such as areas with a priority for subsistence practices. As far as the highly contested recent moratorium on the growing of genetically engineered organisms, Maydan said there are still a lot of unknowns persist about how it will affect the plan.

“We’ve been following the initiative and [it remains to be seen] what our role is,” she said. “It could be a venue to hash it out as far as designating areas [for certain land uses on Molokai.]”

She said in sections of potential dispute within the update process, it may come down to a vote of CPAC members, to be followed by review of the Molokai Planning Commission.

Maydan said one of the biggest challenges of the update process can be predicting community growth. For example, during the last update, Molokai’s population was 6,800 and projected to have grown to 9,100 by now, according to Maydan.

She added the plan examines that growth and how it impacts factors such as land use, county services and additional infrastructure needs.

Starting in the New Year, the CPAC will meet for six months, followed by another six-month period of review by the Molokai Planning Commission. After that, the plan will be in the hands of the County Council for one year, during which more public hearings will be held. The final draft of the community plan will then be reviewed by the Mayor’s office before it’s finalized.

Molokai is the last Hawaiian island. We who live here choose not to be strangers in our own land. The values of aloha `aina and malama `aina (love and care for the land) guide our stewardship of Molokai’s natural resources, which nourish our families both physically and spiritually. We live by our kupuna’s (elders) historic legacy of pule o`o (powerful prayer). We honor our island’s Hawaiian cultural heritage, no matter what our ethnicity, and that culture is practiced in our everyday lives. Our true wealth is measured by the extent of our generosity. We envision strong `ohana (families) who steadfastly preserve, protect and perpetuate these core Hawaiian values.

We are a wise and caring community that takes pride in its resourcefulness, self-sufficiency and resiliency, and is firmly in charge of Molokai’s resources and destiny.

We envision a Molokai that leaves for its children a visible legacy: an island momona (abundant) with natural and cultural resources, people who kokua (help) and look after one another, and a community that strives to build an even better future on the pa`a (firm) foundation left to us by those whose `iwi (bones) guard our land.