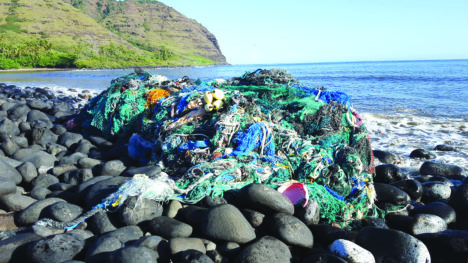 A huge mass of netting and marine debris in Halawa was removed at the end of last month in a massive effort of multi-agency collaboration and volunteer labor. Almost 30,000 pounds, or 14.5 tons, of trash was flown out of the valley by helicopter in 58 giant bags avering 500 pounds each, said Molokai’s James Espaniola with the Department of Land and Natural Resources (DLNR) Division of Forestry and Wildlife (DOFAW).

The massive ball of netting washed up in Halawa at the beginning of this year, and was described as the size of a large SUV, about 25 to 30 yards across.

“When I first saw this net, I was mind blown,” Halawa resident Greg Solatorio told KHON in February. “I was like, wow! I’ve never seen anything like that wash up onshore.” 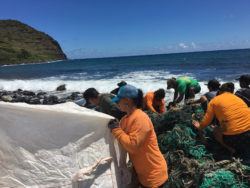 About two dozen workers and volunteers spent about a week in the hot sun on the rocky shoreline cutting up the netting, bagging it and preparing it to be flown out. Then workers attached the bags to the helicopter to be sling-loaded out of the valley one by one. Dump trucks also assisted in transporting the rubbish.

“I was kind of amazed at what I saw,” said Amy Gore of Pu’u O Hoku Ranch, one of the landowners involved in the cleanup. “The effort involved in getting rid of the plastic was incredible… Climbing on the rocks, risking their health… It was grueling physical labor. It’s impossible to conceive of the effort that goes into this if you’re not there watching… It was really impressive.”

In addition to helping with the netting, Gore and other volunteers spent the month cleaning the beach of plastic pieces that had also washed up, scattered on the beach and lodged among the rocks. Espaniola said 40 of the bags flown out contained the netting, while another 18 bags contained plastic and other marine debris collected. 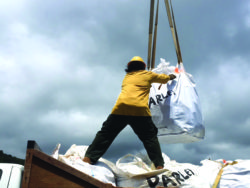 DOBOR contributed $8,000 for the helicopter removal of the bags. Pu’u o Hoku provided manpower as well as an area on the Ranch for a staging area. Other landowners in Halawa also participated. Maui County personnel assisted with coordination efforts and a dump truck for hauling. Sustainable Coastlines will receive, ship and process the debris when the organization comes in August for its annual Mo’omomi beach cleanup. None of the Halawa rubbish will end up in Molokai’s landfill; it will all be shipped off-island, and some of it will be burned for energy on Oahu, according to Espaniola.

“It was really admirable how all these different organizations… all worked together and there was a lot of organizing and it was amazing teamwork,” said Gore.

“We never really hear about these cleanups because people just do a lot of beach cleanups themselves or they’re in remote areas so we don’t often hear about it,” he said.

In 2016, another multi-organization collaboration removed 16 tons of trash from Molokai’s northern coastline. But leaders for the Halawa debris removal said the shear concentration of rubbish in one small area made Halawa’s effort noteworthy and extra challenging.

“This cleanup has been one of many but it is the toughest one yet,” said Wailana Moses of TNC Molokai. “It is very exciting that more agencies are joining us to clean our coastlines and keep our ocean healthy.”

Where did the giant mass of netting come from? Officials say there’s no way to know for sure. In January, a large marine debris field was spotted by fishermen floating between Molokai and Oahu but was later reported to be dispersed. It’s possible that the netting in Halawa was part of that debris, according to experts, but there’s no way to prove it. 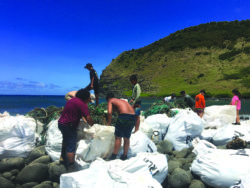 Regardless of its origins, Gore said the cleanup made her think hard about the use of plastics.

“Ever since the beach cleanup, when I go to the supermarket, I notice everything is in plastic,” she said. “Think about every piece of plastic you purchase and how you dispose of it. I think we all need to be more aware of it than we are.”

But seeing the community and organizations come together was inspiring, Gore said.

“It was a very positive response to an unfortunate situation,” she concluded.

If you see large marine debris mass on the Molokai shoreline or reef, report it by calling Espaniola at 808-268-1183.