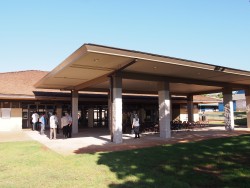 After being closed for renovations for almost a year, Kaunakakai’s community facility, the Mitchell Pauole Center, reopened with a blessing last week. The center now features a new 2,826-square-foot covered lanai for performances and gatherings, upgraded kitchen and bathrooms, new flooring, paint and other improvements. The facility was also brought into compliance with Americans with Disabilities Act (ADA) standards for accessible design.

Buenconsejo said additional work is planned for the Mitchell Pauole Center. The aging roof will be replaced, he said, and funding has already been appropriated.

During his term as Parks Director, he said he and his team will “look forward to bringing Molokai back where it should be.”

Molokai Councilmember Stacy Crivello expressed gratitude to her fellow councilmembers for their support of the project.

“It feels really good,” she said of the completed improvements. “It’s nice to walk on the floors and not worry if you’re going to fall,” she joked. “We don’t have to worry about putting up easy-ups [for events]… May the message go out to Molokai that we will malama what we have been given.”

Many also mentioned the removal of a shed near the center that had been called an eyesore for years.

“I’ll miss the shed ‘cause that’s where I used to hide!” joked Councilmember Mike Victorino. He said he remembered when he first came to the council eight years ago and former Molokai councilmember Danny Mateo asked for help getting the money for the facility’s improvement.

Mateo, now working as county clerk, beamed with pride as he spoke of the journey to accomplish that goal.

“I believe our people deserve everything we can give them…” he said. “Projects like this make me really proud. It is absolutely a dream come true.”