It looked like a box of switches, buttons and a few screens. But what the National Guard set up at the armory in Kaunakakai on June 5 was actually a $500,000 communication system that will help save lives when disaster strikes Molokai.

“This was designed for an emergency where your communications have been destroyed or are inoperable,” said Jonathan Dawson of the 149th Combat Communications Squadron, which came to Molokai from North Highlands, Calif., for a demonstration of the system. The contraption is called a Joint Incident Site Communications Capability (JISCC), and it flew into Molokai on a Black Hawk helicopter. 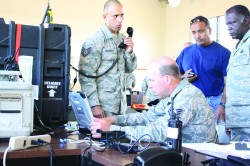 The National Guard demonstrates an emergency communication system that would allow Molokai to contact responders around the state in a disaster. Photo by Emily Sumners

Molokai fire officials and members of the Emergency Action Committee (EOC) gathered with the squadron to learn about the system. It was all part of a state-wide emergency drill in which the Guard set up JISCC units to practice what they would do in case of disaster.

“Pretty much every island is being covered with some form of communication,” Dawson said. From the armory on Molokai, JISCC operators were able to send and receive video footage to National Guard assets on other islands. With wireless Internet (WiFi) and cell phone technology, this may not seem like much of a feat, but when power lines are down and cellular service is blocked, the JISCC will allow emergency responders to continue communicating with each other across the state.

There are five National Guard assets in Hawaii, but none on Molokai or Lanai. This means there is not continual Guard defense or services on these two small islands. Erica Morris of the 149th Squadron said this was why they came to Molokai.

“The big push was to make sure we get to the smaller islands,” said Morris. “You guys were the priority for us… We wanted to make sure if there was an emergency, the island wouldn’t be left in the cold without any support.”

Zhantell Dudoit, public relations and communications specialist for the EOC, said the people of Molokai will come together and help each other in the event of an emergency. However, developing a plan will ensure all resources will be best used. She called the EOC a group of community members who love Molokai and its people and who take action in emergency situations – without waiting for bureaucratic okays. She added that for the last four or five natural disaster threats, the EOC was able to respond with evacuations or other actions quickly and effectively.

Dudoit said a couple months ago, the EOC met with National Guard representatives to talk about resources and experts available in emergency situations.

“The frustration is that the EOC hasn’t seen – at least for a while – who has inventoried these things,” Dudoit said. She added that Guard representatives told them at the meeting that they could radio to Maui officials for supplies. The Guard officials were surprised to learn that Molokai does not have a radio to use in those situations.

“How do you create a plan if these things are ours but are not available to us?” Dudoit said, adding that emergency officials have now sent emergency radios to Molokai to stay on the island. At the demonstration last week Guard officials also programmed fire department handheld radios to the JISCC system, which would send the signal to Maui via satellite so that responders there can provide help. National Guard representative Daniel Markert said the ability to contact Maui officials will speed rescue and recovery on Molokai.

“How do you get help? The roads are closed, the runway is damaged. The first responders and local government have got to find out what has gotten damaged and who is stuck,” Markert said. “Their priority is to figure out what’s not working, and how do we fix it… But if communication systems are down, how is Maui going to know Molokai needs, say, a truck load of chainsaws to clear a road?”

Hawaii National Guard Adjunct General Darryll Wong said the demonstration of the JISCC allows the Guard to become familiar with Molokai so that when they arrive in an emergency, they know who they are working with and what the island is like.

“To find out what Molokai may need is important to us,” Wong said. “These people can set up on Molokai because they have done it and know it.”

He said the National Guard’s role is to save lives and minimize suffering, and continuous planning and improvements will help them do that for Molokai.

“The biggest thing in a natural disaster is assessing the needs,” Wong said. “We’ll continue to build capacity so we know this island can take care of itself for a short time.”

Dudoit said she may try to find grant money that would allow Molokai to purchase its own JISCC that would stay on the island. Meanwhile, the demonstration June 5 was a step in the right direction. Instead of waiting for the next disaster, officials and residents are working to create plans to increase safety and response.

“This is a very good beginning,” Dudoit said. “Things like this give us the opportunity to help be involved in the planning with proper agencies in a way that is efficient and workable and operable.”