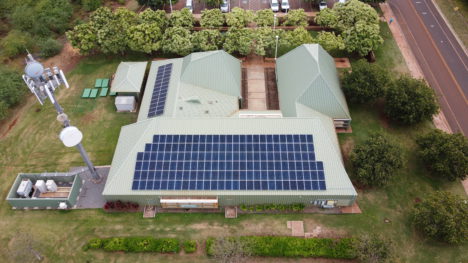 One hundred eighty-two solar panels recently installed on the UH Molokai college campus’ roof will not only reduce the college’s electric bill but offered five Molokai resident interns the rare chance to get a hands-on learning opportunity. Alongside industry professionals, the interns helped install the panels after completing classroom work that gained them a certificate in renewable energy.

“These internships are very hard to come by to place students in the solar area,” said Keisha Nakamura, program coordinator for Hana Lima, a Native Hawaiian career and technical education program through UH Maui College, which helped coordinate the Molokai opportunity.

The non-credit certificate involved 15 hours of classroom training, offering students a comprehensive understanding of the various stages of a solar project -– from business development to project commissioning, said Nakamura. The opportunity wrapped up with 30 internship hours of field training — the hands-on installation of roof racking, photovoltaic (PV) array layout and installation, electrical equipment and interconnection.

After completing the class, students earned a Renewable Energy and PV Associate Certificate of Professional Development, according to Nakamura.

“During COVID, internship programs are far and few between, making this opportunity rare and priceless,” said U’i Kahue, one of the interns to compete the class. She said all five interns took the class with different goals, but she hopes to use the knowledge to help fellow homesteads with their solar projects. 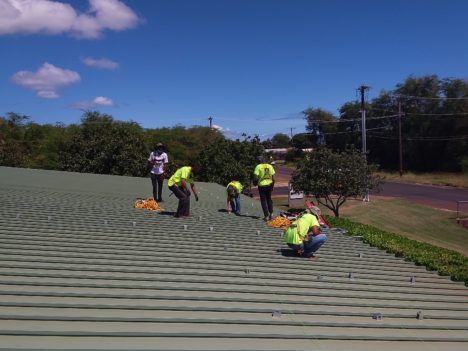 “Also shared between us interns, was the fact that we all took the course to help us become more independent with renewable energies and possibly even create our own PV systems for our homes and businesses,” said Kahue. “One had already been through the process for his own residence and took the class to help reinforce what he learned and to help him in the future to maintain his system himself.”

Aravind Venkatesan, a solar design engineer at Maui-based solar company HNU Energy, was instructor of the classroom portion as well as project manager for the college’s installation. He said the college’s system consists of a 65 kilowatt installation that is grid-tied — meaning it has no batteries for storage of the energy but instead feeds back in Hawaiian Electric’s Molokai grid and the college will receive some credit back for the energy generated by their panels. He estimated the project would help cover between 40 and 60 percent of the college’s energy needs.

Venkatesan said the course put the give interns in a strong position to work in the solar industry in the future if they choose.

“A lot of them will be working on stand-alone systems for their own homes and they know the ins and outs of what’s needed on the roof,” he said. “If they choose to go that route [of working in the solar field], hands-on experience is very notable -– it definitely helps get a job in the field.”
The installation portion was planned for three weeks, but Venkatesan said it went quicker than expected “because of the quick learning of the interns, their aptitude.”

While a licensed electrician is required to interconnect the solar panels once they’re installed, Venkatesan said the interns are qualified to complete the panel installation portion of a rooftop solar system.
“I feel like on Molokai there’s a lot of demand, the skills of the interns is quite valuable — how they channel that is up to them,” he said. “If you get a quote from a Maui company, it’s expensive. The local knowledge is good to have.”

Hawaiian Electric is soon expected to release two requests for proposals for large-scale solar projects on Molokai that will developed in the next two years.

“It’s an industry that’s only expected to grow in coming years so it puts them in a place that’s ready when jobs do become available… we already have a qualified pool of students who have at least foundation training that they can call upon,” said Dudoit.

She said solar for the college had been discussed repeatedly in meetings as a community suggestion but when a grant opportunity came up to “pair education and training with the actual installation on our campus,” she said the project “happened so fast.” When students signed up for the certificate class, they didn’t even know that an internship built around the installation would be available.

“It’s not only a chance for them to learn hands on installation practice but for them to give back to the community,” Dudoit said, adding an emphasis on education as service and encouraging graduating students to examine how they can find opportunities to serve the community.

Regardless of how the five residents choose to use their knowledge, Kahue said the hands-on portion of the internship gave participants “confidence that does not come from a virtual classroom.”

After completing the main installation of 156 rooftop panels, “we were tired, sunburned and extremely hot but also extremely proud,” she said. “Two of us are mid-50s tutus that dug deep to finish but elated that we did! We have bragging rights now and hope our mo’opunas do too when they pass by the campus… ‘Eh! My tutu put that up!’”

For those interested in pursuing solar training at the college, Dudoit said the college is planning another energy certificate in the next academic year for students as a credit class.