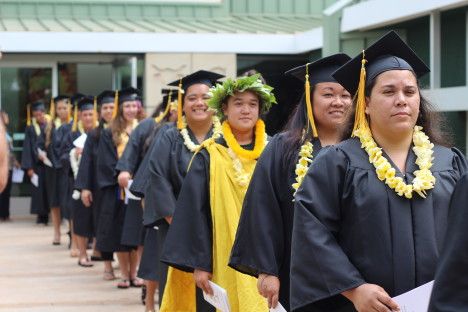 More than 100 Molokai graduates of all ages were honored for completing an important milestone in their lives two weeks ago as they earned associate, bachelor and masters degrees on Molokai. Every four years, University of Hawaii Maui College Molokai campus holds a commencement ceremony and this year’s 41 graduation participates represented just a portion of the 116 students that received degrees between 2012 and 2016.

The graduates — ranging in age from 17 to 59 — are 75 percent Native Hawaiian. They represent all walks of life, including three couples, two siblings and three military veterans. They are parents to 38 kids. Some of them completed their degrees in two years while others worked hard for more than 20 years to complete their goals.

Celebrating family accomplishments and different learning styles is a trademark of Molokai graduations.

The Molokai branch of UH began offering classes in 1970, and the college has come a long way since then. In the early days, instruction was given at Kaunakakai Elementary School.

“You would see rather large individuals sitting in Kindergarten chairs,” recalled college lecturer Dan Bennett in 2015.

“In 1994, as a student at the Molokai Education Center, the rain was dripping through the roof of the former Maui Electric Building onto my paper as I sat writing an exam for a [Masters in Education] program,” said Molokai student-turned-professor, Caryl Hitchcock, also in a 2015 interview.

Today, graduates enjoy the modern amenities of a college campus and the promise of more facilities and opportunities to come. And, as in the past, diversity and individualized learning is celebrated.

Avelino-Purdy said she began taking college classes as an “experiment” when her mom became too busy to continue homeschool education.

“This is a really important moment for me… and especially my mom, since she helped for this whole journey,” she said. “It was kind of an experiment, we didn’t know what we were doing but we did it and I’m humbly proud.” 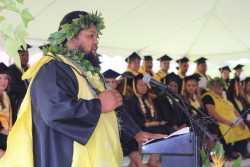 For valedictorian and one of the student speakers at the commencement, Ekolu Ah Yee, said when he enrolled in college in 2013, he “didn’t know what I wanted to do, nor did I have the slightest clue of what I wanted out of my education.”

“Despite all of that, I jumped in head first and it turned out to be one of the best decisions I made in my life so far…. College has opened so many new doors for me,” he said. Five years ago, you wouldn’t catch me dead up here. No ways.”

Ah Yee said having the opportunity to tutor fellow students at the college has made him want to become a teacher.

“Consider this. Ask not what Molokai can do for you but what you can do for Molokai,” he said.