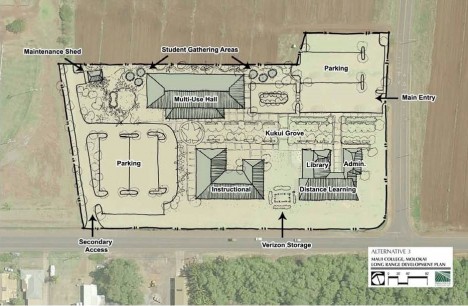 Picture this: a higher learning education center with a spacious auditorium, high-tech computer labs, larger classrooms and a grassy campus pavilion right here on Molokai. This long-awaited dream may become a reality for UH Maui College, Molokai now that the college has completed its Long-Range Development Plan (LRDP).

The college worked with PBR Hawaii –an urban planning firm –to draft the LRDP which was started in 2012.  The LRDP was approved and finalized in June 2014. This plan will guide the development of the college to the year 2027. The first measure of development will include expanding the current two-acre site to a five-acre campus that will utilize the land to the west along Kamehameha Hwy.

“We developed this plan to see what we need for the college,” said site coordinator and professor for the college, Donna Haytko-Paoa. “We want to bring things onto the campus that we don’t already have, but are essential, such as an auditorium, science labs and additional instructional classrooms.”

The new college development will open up a greater variety of courses in a wider range of degrees, leading to larger educational opportunities for students, Haytko-Paoa said.

Although the ultimate goal is to expand the campus into 15 acres, the college is currently looking at an incremental expansion, starting with the 3.2-acre lot. This acreage was previously owned by Molokai Properties Ltd, also known as Molokai Ranch, who sold the college the property in 2012.

How It All Began

For Haytko-Paoa, who has been working with the college since 1984, the LRDP is a positive step in the right direction.

College officials began the process of gaining a permanent campus in 1988 and by 1992, an independent site study was conducted to determine the best location.  In 1993, the current site a quarter mile east of Kaunakakai Elementary was chosen.  That following year, the Molokai Community Plan was being reviewed and when the community advisors got involved, they decided that 15 acres of land would be appropriate for future college expansion.  Acccording to Haytko-Paoa, the current 2001 Molokai Community Plan still includes this designation.

The college opened the Molokai Education Center in 1999, with the expectation that an additional three to five acres would be added soon after.  Funds were not available at the time, so the college split the development into phases, starting with the existing two acres of land, donated by Molokai Ranch. The college built the first phase with a 10,000 square-foot facility with a student learning center, computer lab and a number of small classrooms.

The second phase of the project planned for the 3.2 acres calls for much more. Additional computer and instructional-use classrooms and a large multi-use hall, that would host college graduation ceremonies as well as serve as a performing arts venue for the community, are part of the development.

“As a priority we wanted to do an auditorium/theater type hall with great acoustics, lighting and enough space to really showcase the arts,” Haytko-Paoa said. “There is no venue on this island that seats 500 people. If we can get this multi-use hall it would be for college and community use. We could have plays, music, dance, Ka Hula Piko, meetings and more.”

There is currently no timeline on when development will begin, Haytko-Paoa said.

The next step in the process is too secure enough funding for design and construction.  The legislature has proposed $2.25 million in funds for the project, but that is not yet enough to cover the costs.  In addition, the UH has a moratorium on new construction right now in order to address their backlog of repair and maintenance.  Even with these challenges, Haytko-Paoa said she hopes to have the two new facilities identified in the LRDP completed by 2027.

“Appropriating money to Molokai isn’t always a high priority when we have to compete with the needs of larger communities,” Haytko-Paoa said. “It’s been a real challenge to get this to where we are.  It takes patience, commitment and an understanding that things take time, but at some point, we get to have our turn.”

While the current plans regard the three-acres west of the existing college campus, the dream of an additional 10 acres to the north for the 50-100 year time frame will depend on updates and input to the Molokai Community Plan, with meetings to be starting soon.

“You want that ambiance of feeling good on campus,” Haytko-Paoa said. “If we’re going to develop, let’s use the development for higher education on Molokai.”

The LRDP provides viewers with an idea of how the future campus might look with site assessments, designs, cost estimates and conceptual site plans for a 5 and 15 acre campus. A copy is available for review at the reference desk of the Molokai Public Library.